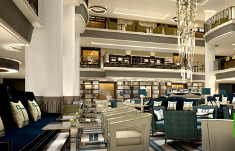 Britannia is the largest ship built exclusively for Britain. It has the capacity for 4372 passengers. The ship effortlessly combines classic signature features, sophisticated wows and new innovation, making her the most exciting representation of the P&O Cruises World Cruising fleet.
The ship will join the fleet in March 2015 and in her maiden year she will visit 57 Port in 31 countries. There are 9 places to enjoy entertainment, 13 bars and places to eat, 4 pools and a sport arena, extensive children’s facilities, theatre shows, films, nightclub and all outside cabins have balconies. Plus much more!
On the outside Britannia embraces a bold new 94 meter Union Flag on her bow displaying the longest version of the Flag anywhere in the world. The new style represents a contemporary approach to cruising which looks to the future, whilst celebrating the past.
Britannia is certain to wow you with her striking décor and breathtaking interiors. And while she may be a large ship, every inch of her interior has been carefully considered. Designed to make you feel special, her rooms have been planned with imagination and flair, while bold features create a real talking point.