The 2018 edition of the incredible festival of light, music, and ideas that is Vivid Sydney will incorporate the iconic Luna Park. This year will see the Customs House return while the sails of the Sydney Opera House will dazzle with amazing Australian-inspired motifs.

It will be the first time the Vivid Sydney Light Walk will reach all the way to Luna Park where Sydney’s much-loved amusement park on Coney Island will be lit up with large-scale projections. Luna Park’s famous Ferris Wheel has been refitted with LED lights and now boasts many more additional lights which will also be lit during the festival.

Other new installations include: Parrot Party, which is inspired by the New Zealand Kea Parrot and the Australian Rainbow Lorikeet; interactive pathways of light Aqueous; a giant, metallic flower The Bloom; and He’e nalu will allow festival goers to feel as though they are surfing. 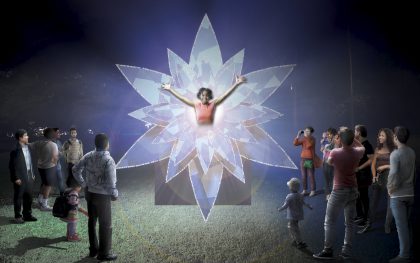 As Vivid Sydney marks its 10th anniversary, the World-Heritage listed Sydney Opera House will command centre-stage at the pinnacle of the Light Walk for the Lighting of the Sails. The façade of Sydney’s main landmarks will be transformed to fantastical light works, including the Museum of Contemporary Arts Australia (MCA) which will bedazzle with Virtual Vibration. Skylark will connect the Sydney Harbour Bridge, the skyscrapers of Circular Quay  all the way to Sydney Harbour in a colourful interactive display that will allow participants to leave their own mark on one of the most beautiful cities in the world.

Other popular precincts including Taronga Zoo, Darling Harbour, and Barangaroo will also return in 2018 which will all feature past favourites as well as new features.

Minister for Tourism and Major Events, Adam Marshall said, “Vivid Sydney has delighted and inspired people from around Australia and the world. With the Festival now in its 10th year, visitors and locals alike can once again expect to be mesmerised by the Vivid Sydney program, with larger installations and a gripping Music and Ideas offering, so I encourage visitors to start planning their trip early to get the most out of this year’s exciting line-up.

“Over 23 nights from Friday 25 May to Saturday 16 June, Vivid Sydney will paint the Harbour City in the colour and spectacle of Vivid Light, take over Sydney stages with Vivid Music’s electric performances and collaborations, and provide a global forum for thought-provoking debate and creative discussion at Vivid Ideas."

Similarly, Premier Gladys Berejiklian commented, “Each Vivid Sydney Program continues to outshine the last and 2018 will be no different with special designs to celebrate a decade of what has turned into Australia’s most visited major event…"

…“There is also an important addition to Vivid Sydney’s Harbour footprint this year, with Luna Park joining as a new precinct…’’

Vivid Sydney Festival returns from 25 May to 16 June 2018. The full program can be found at www.vividsydney.com