The Blue Mosque in Istanbul

The bridge between Europe and Asia, Turkey is a fascinating and exotic melting pot of cultures and a truly unique destination. Turkey is one of the oldest continually inhabited regions in the world, with a history stretching some 10,000 years it’s no wonder that it is home to more than 40,000 ancient sites. And there’s no limit to the amount of ways you can soak in the mysteries of this ancient nation. You can try your hand at bartering at one of the 3,000 shops in the labyrinth that is the Grand Bazaar. You can take in the majesty of the Blue Mosque in Istanbul or unwind on one of the sandy beaches on the Mediterranean coast. Cruise along the waters of Southwest Turkey’s coast in your own private boat, or explore the ruins of Troy. Turkey has such a plethora of options for your itinerary, you’ll surely be coming back for more.

Your first destination in Turkey should be cosmopolitan Istanbul. Here you can visit landmarks of this ancient city such as the famous Blue Mosque; the 15th century Topkapi Palace, medieval home of the Ottoman sultans; and the Aya Sofia with its well preserved Byzantine mosaics and frescoes. But the grand architecture of Istanbul is also home to a bustling daily life. You can savour the sights and smells of the Spice Market where you can taste local delicacies, before losing yourself in the maze that is the Grand Bazaar. Be sure to take a moment amongst your sightseeing to stop and relax with a traditional Turkish coffee or at one of the bath houses and watch Istanbul life go by.

Anzac Cove – Attend the Dawn Service in 2016 with Silversea

If you move south to the Gallipoli Peninsula you may take a moment at Anzac Cove and pay your respects at the Commonwealth military cemeteries including Lone Pine. Also worth a visit, if you’re interested in history, is the military museum near the site. From the peninsula it is only a ferry ride across the Dardenelles before you can make your way to Troy. Excavations began here in the late 1800s and the blurred lines between fact and fiction will leave you yearning to know more. After a day of history you can spend your night on the seaside at a typical Turkish town such as Canakkale.

From Canakkale you can take the scenic road to Assos. A city whose ancient walls are amongst the best preserved in Turkey. From here you can visit the Temple of Athena before winding through olive groves, past pebbly Aegean beaches to the ancient ruins of Pergamum. Spend the night in Izmir before moving on to explore the site of Ephesu, the best preserved classical city in the Eastern Mediterranean. Here you can walk in the footsteps of the ancients and feel as though the history is coming to life.

But be careful not to be distracted by Turkey’s coast, inland has just as much to offer. Perhaps the most famous district is Cappadocia. Who hasn’t experienced wanderlust looking at the photos of the hot air balloons gliding over the honeycomb hills of the Anatolian plains? Goreme is a perfect starting point for the region, famous for its ‘Fairy Chimneys’, the pinnacle shaped monoliths and underground cities. You can also visit the extraordinary rock-carved Byzantine churches, now an open-air museum, and their beautiful painted frescoes. Once the heart of the ancient Hittite Empire and then a key point on the Silk Road, Cappadocia has much more to offer. You can explore the underground city of Kaymakli or stay above ground with a hike along the Red Valley. 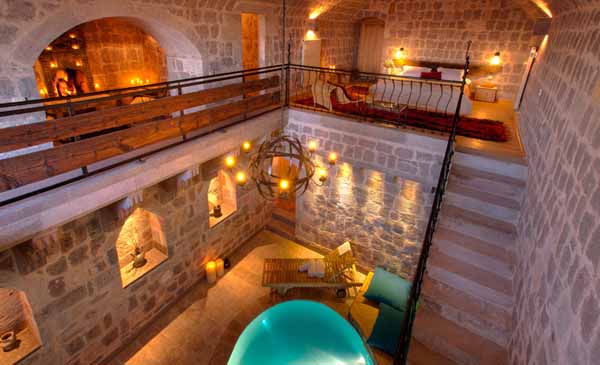 While in Cappadocia a must stay at hotel is the incredible and unique Argos in Cappadocia. This luxury resort truly encapsulates the breathtaking nature of the region. Nestled underneath an ancient monastery, this luxury hotel inhabits five and a half kilometres of tunnels all connecting a collection of fabulously appointed mini manors. Staying at Argos in Cappadocia is like immersing yourself into the old fables of ancient Arabia while not sacrificing a world lass level of luxury.

The weather in Turkey varies strongly, average temperatures in Istanbul range from freezing in January to around 30°C in August. There are certain times of year that give you an extra reason to travel to Turkey. In April Istanbul hosts it’s Tulip Festival and 18 million bulbs blossom across the city. Also in April is the annual commemoration of the WWI battle for the Dardanelles is held with moving dawn services at Gallipoli on the 25th. In June is the International Istanbul Music Festival which features some 30 performances in historic buildings and palaces and in September Istanbul hosts the International Istanbul Biennial, a themed arts festival.

Whether food, history, culture, beach resorts or beautiful photo opportunities are your thing; Turkey has something to offer everyone. It has often been listed as one of the most ideal travel destinations and also happens to be one of the cheapest air entry points into Europe. The question should not be whether or not you should visit Turkey, but how many times you can go back.