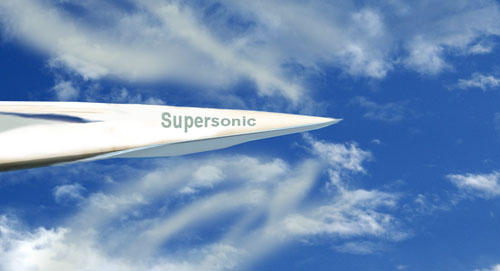 Virgin Atlantic has indicated their interest in the first ten of a new kind of supersonic jets, with Richard Branson interested in the potential for business and high-end personal travel.

Although smaller than the Concorde, this jet will be both quieter and faster. The jet is suggested to be able to fly between Sydney and Los Angeles in six hours instead of the current fourteen hours. The London-New York route is equally appealing at only three-and-a-half hours.

The designers envisage 40 seats in each single-class, with a 1-1 layout so that every passenger gets both a window view and direct aisle access.

“This isn’t science fiction," says Boom founder and CEO Blake Scholl. “We’re not using any technology that doesn’t already exit, it is just putting it together in th right way."

“This is supersonic passenger air travel…and it’s actually affordable. The idea is for a plane that goes faster than any other passenger plane built before, but for the same price as business class. Out ultimate goal is routine supersonic flight for everyone."

The company hopes to wheel a working prototype out of the hangar by the end of 2017.

Curently, we have these First & Business Class Airfares to North America >>