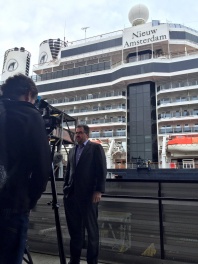 The line has increased its Seattle calls this year to 55, and three Holland America ships will sail roundtrip Seattle routes in 2016: the Westerdam arrives Saturday, May 7; the Amsterdam arrives Sunday, May 22; and the Maasdam arrives Monday, May 23, to begin their Alaska sailings from Seattle. New to Alaska cruising, the Nieuw Amsterdam’s arrival at Seattle is the start of a one-day cruise to Vancouver, British Columbia, to reposition to its summer homeport.

In addition to the 48 roundtrip Seattle cruises to Alaska this season, three cruises to Australia/New Zealand or Hawaii/South Pacific will begin or end at Seattle, including the Amsterdam’s 53-day Tales of the South Pacific voyage and the Maasdam’s 23-day South Pacific Crossing. All of the options combined make a total of 55 calls by five ships — the Zaandam makes one Seattle call — that will welcome more than 86,000 guests to Seattle.

“As Seattle’s hometown cruise line it’s fitting that one of our ships is kicking off the city’s Alaska season, a time we eagerly anticipate each year," said Orlando Ashford, Holland America’ president. “We are headquartered in Seattle, and we take great pride in being a significant contributor to the local economy and in actively giving back to our community."

In the coming year, Holland America expects to contribute $389 million to the Seattle economy and $547 million across Washington State. The cruise line employs 1,170 people at its Elliott Avenue headquarters in Seattle.

Provisioning costs each time a ship calls at Seattle average about $300,000 per visit. The crise line works with more than 600 Washington vendors, from food and beverage suppliers to piano tuners, office supply stores and marine suppliers, among many more. For example, the Westerdam requires over 23,000 eggs and 1,375 gallons of milk each week — all of which come from local farmers. In addition, local growers supply 147,550 pounds of fresh produce a week.