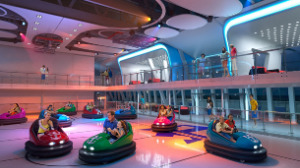 Royal Caribbean International has unveiled what it describes as the “next generation of cruising”, with its new Quantum class of ships.

Set to debut the new class in 2014 with Quantum of the Seas, the style of cruising span 18 decks, carry 4,180 guests at double occupancy and feature 2,090 staterooms.

Quantum of the Seas will include the first skydiving experience at sea with its RipCord by iFly attraction designed to allow cruisers to skydive in a safe, controlled and simulated environment.

The ship will also sail with transformative venues including; the largest indoor sports and entertainment complex, which offers bumper cars and roller skating, the Two70° room designed to provide cruisers with 270-degree panoramic sea views through floor-to-ceiling glass walls spanning almost three decks at the stern of the ship as well as the Music Hall for live music.

Meanwhile, accommodation in the Quantum class ship will be on average nine percent larger than those of the Oasis class ships and will be equipped with contemporary designs and easy-to-use layouts.

Quantum of the Seas will introduce the new Virtual Balcony staterooms, which bring virtual balconies to interior staterooms.

The Family-Connected staterooms provides separate bedrooms and bathrooms, allowing families and friends to enjoy time together and alone.

Other rooms on the Quantum of the Seas include the Studio staterooms as well as the Junior Suite categories and larger Loft Suites.

Royal Caribbean Cruises chief executive Richard D Fain said the new style of ships gives the company the opportunity to “make another leap” in design with “unique features [to] boggle our guests’ minds”.

The new class will debut in 2014 with Quantum of the Seas, followed by Anthem of the Seas in 2015.