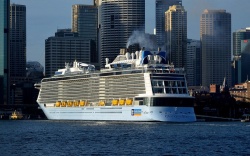 Royal Caribbean has announced itinerary details for its 2018-2019 Australia summer cruise season, which will see the line returning to Australia with three large ships. Bookings for the 2018-2019 summer season open on May 16, according to a press release.

The Ovation of the Seas will return for her third and longest season yet based Down Under. The Radiance of the Seas will offer Royal Caribbean’s first departure from Melbourne, as well as three cruises departing from Auckland. Meanwhile, the Explorer of the Seas returns for her fourth season. The sister ship, the Voyager of the Seas, will not return to Australia, instead remaining in Singapore and China for a year-round season.

“Melbourne as a new turnaround-port for the Radiance was an easy choice for us to make. Victorians are known for their love of great food so our culinary ship is the perfect fit. And in Auckland, our style of cruising is continuously growing in popularity so we’re thrilled to offer cruises from our Kiwi neighbours’ doorstep," commented Adam Armstrong, managing director, Royal Caribbean Australia and New Zealand.

“After six seasons pioneering big-ship cruising in Australia and carrying more than 300,000 guests, we will say farewell to the Voyager, as she will instead sail from Singapore and Asia year-round," Armstrong added.

“This deployment change makes possible the early return of the Ovation to her summer home in Sydney, where she will operate her longest ever Australia season. Our most popular local cruise ship, the Ovation, is the flagship for modern Australian cruising, delivering a whole new way to holiday, known as SuperCruising," Armstrong continued.

The 2018-2019 season will kick off with the arrival of the Radiance to Sydney on Oct. 6, 2018. The Explorer will return Down Under on Oct. 27 2018, and the Ovation on Nov. 2, 2018. Together, the three ships will offer 61 sailings, ranging from three to 23-nights, sailing to nine different countries including Australia, New Zealand, Fiji, French Polynesia, Malaysia, New Caledonia, Singapore, the U.S.and Vanuatu.

The Ovation will also offer one unique New Zealand and South Pacific hybrid sailing as well as eight- and nine-night South Pacific voyages to New Caledonia and Vanuatu, a 14-night Singapore to Sydney sailing via Perth, Adelaide and Hobart, a five-night Tasmania cruise and a 14-night Sydney to Singapore voyage with calls to Brisbane, Darwin and Malaysia.

The Radiance will also sail a range of shorter voyages targeted at first time cruises, including a three-night sampler cruise to nowhere, a new four-night cruise to Melbourne and a five-night Tasmania sailing. Guests can also cruise on eight, 10 or 12-night South Pacific sailings and two 18-night Hawaii repositioning sailings at the start and end of her season.

Australia’s second largest ship, the Explorer, will continue her focus on South Pacific voyages, with a range of eight to 14-night sailings. She will also offer a new six-night Tasmania sailing with calls to Newcastle, Wollongong and Hobart, as well as an eight-night Queensland sailing and two epic repositioning voyages between Seattle and Sydney, with calls to Hawaii, Fiji, Vanuatu and New Caledonia.

“We expect that local demand for our innovative and ground breaking ships will see a fourth Royal Caribbean ship return to Australian shores in 2019-2020. Our determination to remain the number one cruise line in this region is undiminished," Armstrong added.