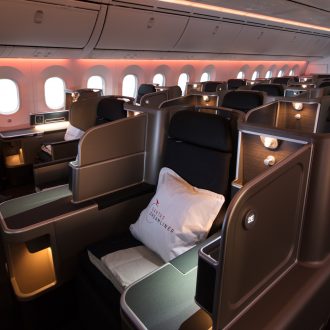 Qantas will start flying its Dreamliner to Hong Kong commencing in December, when customers will experience the next generation aircraft on selected flights.

The eighth Dreamliner to join the Qantas fleet is scheduled to start flights from Brisbane on 19 December, Melbourne between 13 December until 29 March 2019, and Sydney from 30 March 2019. The aircraft joins the carrier’s A330 and A380 which also serve Hong Kong while Hong Kong joins Los Angeles, New York, London, and San Francisco as international destinations that the Dreamliner flies to as the Boeing 747 is gradually phased out on key routes.

The deployment of the Dreamliner to Hong Kong strengthens Qantas’ presence in Asia where the carrier is experiencing a strong demand from premium travellers.

As such the B787, A330, and A380 together means there will be premium inflight offerings on every flight between Australia and Hong Kong during the peak season.

Qantas’ Dreamliner features the latest version of the airline’s Business Suite, as well as the latest Premium Economy, and improved economy that promises more storage and leg room.

From early December, Qantas will also upgrade its Sydney-Hong Kong 747 flight to a A380, meaning four classes will be offered on the route until end of March 2019.

Finally, the double daily Sydney-Hong Kong route will be operated by the 789 six days per week from 30 March 2019. The A330 will operate the remaining day whilst the A380 will operate daily during the peak season.