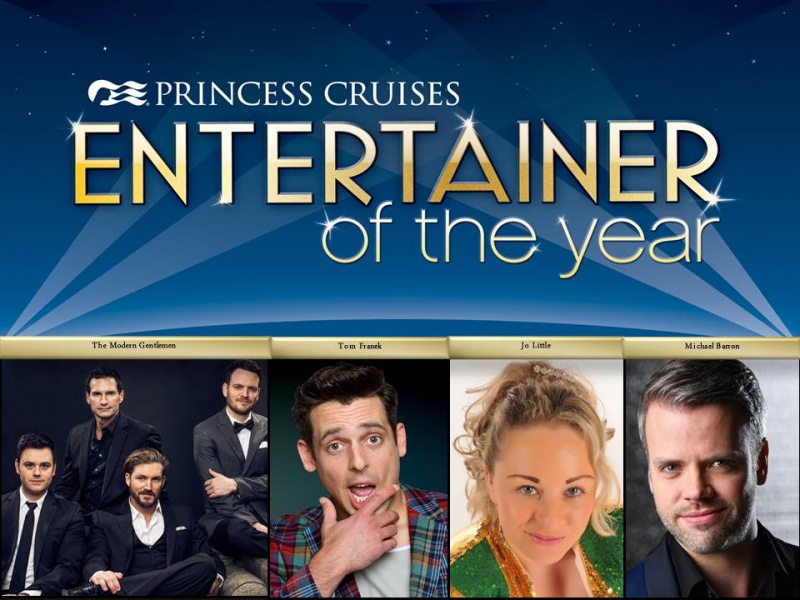 Princess Cruises will soon name its top guest entertainer for 2017 during the cruise line’s seventh annual Entertainer of the Year competition.

Four talented finalists have been carefully chosen from the vast array of onboard performers — including vocalists, comedians, magicians, tribute bands and other specialty acts, the company said, in a statement.

Guests aboard the March 25, 2018 Regal Princess seven-day cruise to the Caribbean will be able to cast their vote for their favorite performer after viewing several live performances from each act during the cruise vacation.

“For a seventh year in a row, we have a fantastic docket of finalists for our Entertainer of the Year competition," said Denise Saviss, Princess Cruises vice president, entertainment experience. “With such an array of talent, our guests are sure to be entertained on board, but might have a difficult time casting their final vote for a winner."

The finalists were selected by the Princess Cruises entertainment department based on guest surveys and onboard audience response.

The 2017 Princess Cruises Entertainer of the Year winner will be announced on the final evening of the cruise at a celebratory event in the Piazza and will receive a $5,000 cash prize.

The four nominees for the title of Entertainer of the Year are:

The Modern Gentlemen — Individually, Landon Beard (San Diego, CA), Todd Fournier (Toledo, OH), and brothers Brian and Brandon Bingham (West Covina, CA), were all in-demand singers prior to being brought together as a quartet by the legendary Frankie Valli. For well over a decade now, they’ve been wowing audiences worldwide providing all the background vocals and choreography alongside the rock & roll icon. Since then, they’ve developed their own signature sound blending modern voices together with four part harmonies performing the classic hits of Pop, rock and Doo-Wop. They’ve toured all over the world on the biggest stages from Royal Albert Hall with the London Symphony Orchestra, and BBC Proms in the park for an audience of over 40,000 people. They’ve appeared onstage with The Beach Boys, The Manhattan Transfer, Tony Bennett and Smokey Robinson, and in front of U.S. Presidents, as well as Prince William, the Duke of Cambridge at the esteemed Arts Club in London.

Tom Franek — Hailing from Minneapolis, Minnesota, Tom Franek is a rising star whose talents are celebrated by over a quarter million fans online, with a debut role on ABC in 2017. His stage shows are performed around the world and combine clean comedy, genuine charisma, dynamic piano playing, singing, dancing, quick wit, and contortionist acrobatics in an unforgettable experience that leaves audiences’ jaws dropped and people talking. There is something special to his particular brand of entertainment that makes him a must see.

Jo Little — Known as “Yorkshire’s Queen of Comedy", Jo Little began her career in the United Kingdom as a DJ and vocalist, and found her true passion on stage to be comedy. Little has performed around the world, including engagements across Europe for Thomson’s and Choice Holidays. She is currently appearing as support to British Show Business Legend Joe Longthorne, on his UK theatre tour appearing at most major theatres throughout the UK.

Michael Barron — Michael Barron is one of America’s hottest illusionists, with over 7,000 performances and 300 television appearances in 35 countries. After attending DePaul University in Chicago to study theatre, he was invited to perform a long running illusion show at Arabian Nights Arena in Orlando, Florida. After five years and 2,200 performances, Michael left the show and was cast to star in a multi-million dollar touring show produced by Kenneth Feld. In addition to his busy touring schedule, Michael performs all over the world at colleges, theaters, corporate functions, and arenas with his own show “Michael Barron: Magic Unhinged," a tradition shattering blend of magic, sarcastic comedy, epic illusions, dangerous stunts, and shocking performance art.