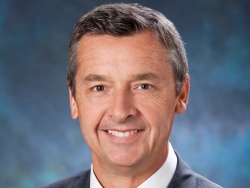 Michael Bayley, president and CEO of Royal Caribbean International, has been selected as the recipient of Seafarers’ House International Golden Compass Award for 2018, according to a statement.

The award is given each year to those who have achieved distinction in the maritime world, those whose vocation or avocation has been the sea, or those who have ministered to or otherwise assisted seafarers, the group said.

“Seafarers’ House plays a critical role in the lives of those who work in the maritime industry. Many of our crew members have come to rely on the organization and consider its “casa" their home away from home when docked at Port Everglades," said Bayley. “I am pleased to be counted among the distinguished group of maritime professionals who have received this award over the years from an organization that truly cares for the seafaring community."

“Michael has had a long and successful career with Royal Caribbean. Under his leadership, the cruise line has grown significantly and will continue to do so with the addition of several new ships in the next few years," said Seafarers’ House Executive Director Lesley Warrick. “Michael and Royal Caribbean have been long-time supporters of Seafarers’ House and we are thrilled to honor him with this award."