For most countries around the globe, 31st December marks the biggest party of the year – New Year’s Eve. It is the date in which most of us prepare to leave behind the year just past, and welcome the brand new one that comes with the dawning of the new day on the 1st of January. But not every country on this planet of ours celebrates on the last day of December. Many countries in Asia observe a Lunar new year, and at different times; China and Singapore in February, and many Southeast Asian countries like Thailand and Laos party it up in April.

So, if you don’t think you did NYE right this year, you don’t have to wait a full year to try again – just hop on over to one of these Southeast Asian countries and give it another go. We promise it’ll be an experience to mark all experiences.

A number of Southeast Asian countries, like those we’ve already mentioned along with others, like Myanmar and Cambodia, are as we speak preparing for their biggest knees up of the year. For these nations, the first full moon in April will bring with it a fresh new year. The period is known by many names throughout the region, but whether it be in the bustle of the city or the quiet countryside, the fun starts with sprays of water to denote the purging of the old and the welcoming of the new. And it helps that it also falls during the hottest months, so a bit of water is just the thing during these festivities. 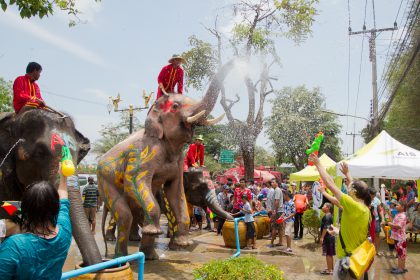 Thailand’s Songkran festival, observed on 13 – 15 April, traditionally sees the younger population respectfully pour scented water over their elders and monks, which signifies the cleansing of sins. Today, this tradition has developed into a fun day for all that’s basically become one giant water fight. It’s not all fun and games though, as the Thai people believe water washes away bad luck and so the throwing of it is fundamentally a sign of respect and a form of wishing others well.

Two of the best cities to see in Songkran in Thailand is Chiang Mai for their cheeky fun of dumping water on passers-by, and Bangkok for their ultimate pool parties. In Chiang Mai, feel as though you are staying in an ancient Thai temple at Dhara Dhevi, and in the busy city of Bangkok escape to the lush 3-acre river frontage of The Siam. 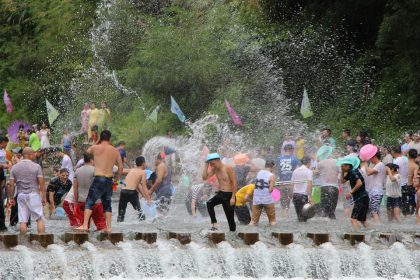 The Pii Mai festival in Laos is a three-day celebration from 14th – 16th April and carries out many of the same activities as Thailand’s Songkran. In Wats, Buddha images are cleansed with sacred water and the people make special offerings at the temples.

Although Pii Mai is officially a three-day festival, in the northern heritage city of Luang Prabang, the party usually lasts for at least a week. Here, the Sofitel Luang Prabang provides elegant luxury and the perfect balance of modern sophistication and cultural traditions. 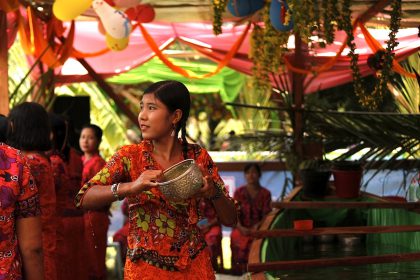 During the four-day celebrations of Thingyan in Myanmar (13th – 17th April), the Burmese party just as buoyantly as their eastern neighbours. While the water festival is a Buddhist event, the Burmese government has made it a legal public holiday. Bamboo pavilions spring up throughout the towns whilst crowds take to the streets in colourful costumes in a merry show of dancing, singing, and parading.

Thingyan is celebrated by just about everyone in Myanmar – the rich, the poor, the monks, the farmers – join in the festivities. So, you can enjoy the celebrations pretty much anywhere. In Yangon the party is robust with plenty of splashing by day and live entertainment by night. The colonial-style mansion of the Belmond Governor’s Residence in Yangon provides a welcome respite from the day’s merriment. 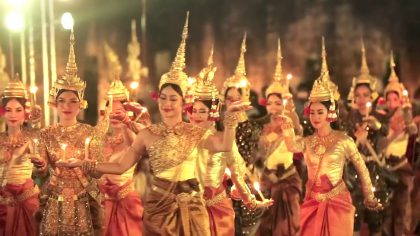 Cambodia’s Choul Chnam Thmey, a three-day festival which usually falls on 13th or 14th of April,  not only represents the lunar new year, but also signals the end of the harvest season. This is a time when farmers stop work and literally reap what they sow before the monsoon season arrives. As well as the customary splashing of water, the people light candles and incense at shrines, honour their ancestors, and pay homage to Buddha.

Siem Reap’s close proximity to the Angkor Archaeological Park is marked by exhibits of Khmer cultural arts around the Angkor temples, including games, dancing and martial arts. Complete your cultural immersion by staying at what once was the King of Norodom Sihanouk’s guest villa and what is now the Amansara Cambodia. 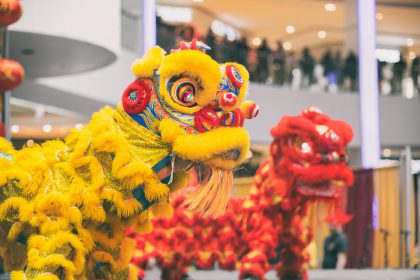 Most people are probably more familiar with the Chinese lunar new year, which is also celebrated in Singapore in February. The dates change annually as it is set by the Chinese lunisolar calendar, but generally falls anywhere between late January to mid-February. The hanging of lanterns and parading through the streets as dragons and lions have become a fond sight and is celebrated in many major cities around the world during this time.

Experience the Chinese lunar new year in a historical hotel at the Fairmont Peace Hotel in Shanghai, China or from the spectacular views of the Marina Bay Sands in Singapore. 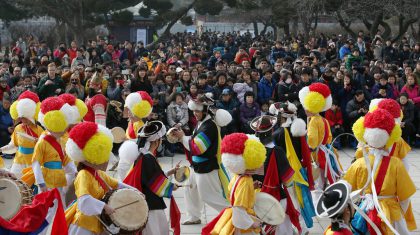 The Koreans celebrate the lunar new year in February also and generally the same as day as the Chinese new year. On the first day of the lunar year they wear hanbok (traditional clothing) and offer ritual prayers to their ancestors for peace and good health. They eat eumbok (ritual food) and exchange sebaedon (new year’s money).

Once you’re spent from the frivolities of the Korean new year, relax in the nature preserve of Mount Namsan which is the beautiful backdrop to the Grand Hyatt Seoul.