The new Qantas safety video has recently been released and it’s more like the little clip you see just before you touch down at a destination. It highlights many of Australia’s iconic locations in a new advertising collaboration with Tourism Australia.

The new film builds on from the last video the carrier made in 2016, which attracted more than 90 million views across the national airline’s in-flight and social media channels. The previous video, released a year ago, also featured everyday Australians in 16 locations across the country, making for a brilliant promotional video as well.

The new Qantas safety video hopes to make passengers sit up and pay attention to what is traditionally a dull screening that carries very important messages. The three-minute video features non-actors, like fashion designer Daniel Avakian, across some of the country’s most important sites, like the Docklands in Melbourne. Qantas is a major investor in Australian tourism promotion and hopes the new film will be as successful as its predecessor.

The new Qantas safety video, filmed over 12 days with Tourism Australia and state tourism organisations, started screening across Qantas domestic and international flights on February 1, as well as on the carrier’s online platforms. It will screen on hundreds of Qantas flights a day to a global audience of almost 30 million people a year. Numerous versions will be released to cater to eleven different languages and the varying aircraft types in the Qantas Group fleet. 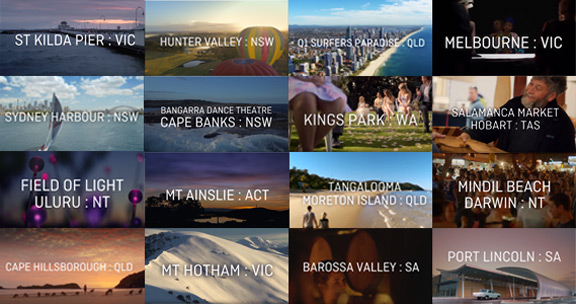 The purpose of the video is two-fold; content from it is being used to promote Australia’s key tourism market, whilst on-board it aims to deliver the inflight safety message to passengers in a more engaging way. Qantas CEO, Alan Joyce, maintains that the new Qantas safety video commands people’s attention because it is ‘interesting to watch’.

‘We know the combination of beautiful landscapes and laid-back Aussie charm really cuts through.  It’s also why this video doubles as a perfect tourism ad.

‘Finding smart ways to reach new audiences is a priority for Qantas and the whole Australian tourism industry, and we’re looking forward to rolling the video out as part of our strategy to keep visitor numbers growing.  We’re confident it’ll strike a chord with travellers from around the world, not to mention Australians thinking about holidaying at home.’

The current Qantas safety video has some big shoes to fill as the 2016 version boasts more than 90 million views across the airline’s social media platforms and inflight. It paved the way for the current edition in promoting our country’s stunning destinations. With the tag line ‘feels like home’, the essential inflight safety message was delivered in places like the Museum of Old and New Art Hobart, Bondi Icebergs, Hamilton Island, Yarra Valley winery, and beautiful Josephine Falls in Queensland.

It was the first time Qantas deviated from the standard structure of a traditional safety video filmed on-board the aircraft, and forfeited celebrity cameos in favour of ‘real’ Australians. For example, the emergency slide information is carried out by a woman sliding down a rock as she advises you to leave all items behind. The 2017 video also features non-actors that have a connection with the destination. For instance, the man delivering the equipment information is the actual hot-air balloon pilot who operates tours over the Hunter Valley every day, and the couple pointing out the exit lights at the Field of Lights Uluru both work there. It’s a nice touch and one that’s unique to Qantas.

Getting more than 90 million views is no mean feat but there was a lot of ground-breaking elements incorporated in the new style video for Qantas to step away from the traditional and step into what would inherently be the new custom for the flag carrier. Not only did they decide to film away from the aircraft, but they also chose to avoid famous landmarks, both suggested by Sydney-based film director and writer, Josh Whiteman saying,

“We made a rule for ourselves. No Harbour Bridge, no Opera House, no 12 Apostles. We wanted to uncover hidden gems across Australia."

And that they did, producing 16 lesser-known locations across every state and territory in the country including a parched salt lake in Western Australia and a dusty cattle station in the Northern Territory, giving viewers an all-encompassing outlook of Australia as a country. Though the 15-strong crew managed to stick to the 12-day shooting schedule, it wasn’t always easy contending with Mother Nature as they went from one extreme (snow at Cradle Mountain one day) to another (45-degrees in Alice Springs another day). But Whiteman maintained that filming outside of the aircraft environment enabled Qantas to avoid the airline safety video becoming ‘like wallpaper’.

“Our aim was to increase the knowledge of safety on the plane – and to do it by being engaging and entertaining so people will watch the video because of its beautiful locations and characters, even if they’re travelling 30, 40, 50 times a year."

The references to Australia’s popular tourist destinations in the new Qantas safety video is also a bid to encourage domestic travel across the country as figures in recent years show that Australians are spending more in Australia.