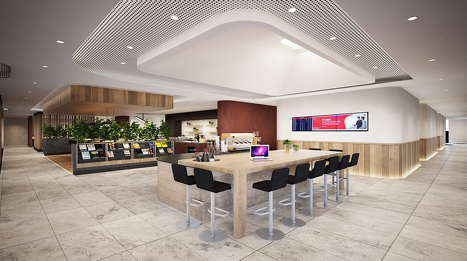 Located in Terminal 4, the lounge is part of the airline’s move to a dedicated Qantas precinct at Perth Airport.

Spread across 1,365 square metres, the business lounge will have room for over 350 travellers flying in business class or holding Qantas Platinum One or Platinum frequent flyer status (and their Oneworld Emerald equivalents on partner airlines such as British Airways and Cathay Pacific).

Qantas says the lounge “will provide convenient access to Terminals 3 and 4," which will be set aside for the exclusive use of Qantas, Jetstar, QantasLink and fly-in fly-out subsidiary Network Aviation.

“From a dedicated work zone with meeting room and conference facilities to a dedicated dining area offering a ‘dish of the day’ and all-day barista service, the business lounge will give our most frequent flyers the ability to work or unwind in luxury” promises Philip Capps, Qantas Domestic Head of Customer Strategy.

Perth is heavily trafficked by premium travellers, predominately from the resources sector, but for years the airport has made do with a Qantas Club, which last year was expanded by adding an extra 400 square metres on a second level.

The Qantas Business Lounge will also be the first to embrace a new design concept which draws elements from the airline’s highly-regarded Singapore and Hong Kong lounges as well as the current domestic business lounges, says Helen Gray, the airline’s Head of Domestic Product & Service.

“There’s a common design DNA across our entire product, and certainly our current domestic business lounges have some of those elements” Gray tells Australian Business Traveller.

“But in the same way that the Hong Kong and Singapore lounges incorporate elements from each city, there will be a bit of regionality around the Perth Business Lounge" she explains. “Some of the colours will be drawn from the landscape of Perth and that part of the country.”

“It’s the next evolution of our Business Lounges… the key element now is regionality, and all the lounges won’t necessarily look the same.”

Gray says there are no make-overs planned for other business lounges in the domestic network, although it would likely happen “the next time we did anything in those lounges.”

The new Perth Business Lounge is being designed by architects Woods Bagot, the same firm as behind most Qantas lounges (including the Chairman’s Lounge and the Los Angeles Business Lounge) as well as Perth Airport’s new international and domestic terminals.