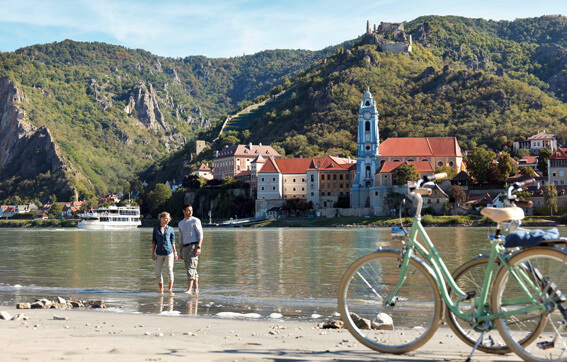 Winding through serene forests, deep valleys, beneath snow-capped peaks, idling through rolling fields of green and past ancient medieval cities; the great rivers of Europe are a nature built travel itinerary perfectly crafted. River cruising is a fantastic, and increasingly popular way to see Europe and with many fantastic companies offering voyages, and Crystal joining the foray this year, there has never been a better time to climb aboard. Experience the best that the great rivers of Europe have to offer all while aboard a five-star luxury hotel. Discover the river cruising difference and a taste of the incredible ports of the Danube and the Rhine.

The second longest river on the continent, the mighty Danube originates in Germany’s Black Forest and flows south east to the Black Sea. A preferred means of travel for the by-gone gentry of Europe as far back as the Roman Empire, the Danube has earned its nickname as the ‘River of Kings’. Itineraries that follow the Danube stop in many incredible and exciting places throughout Austria, Hungary, Germany, Croatia, the Czech Republic and more. 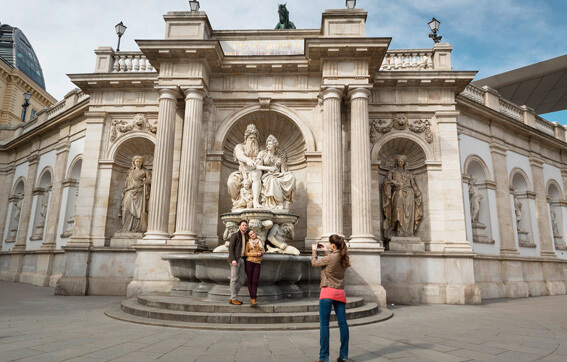 Cruises start from all along the Danube but one of the most popular departure points is the Austrian capital of Vienna. The city is a canvas onto which some of the most talented architects of the thousand years. From towering Gothic cathedral of St. Stephen to baroque façades of the famous Belvedere Palace and modern art nouveau masterpieces like the Anchor Clock; Vienna is an open air catalogue of inspired Austrian building. Aside from the incredible sightseeing potential the city also boasts a wide variety of cultural indulgences, such as the famous Vienna Opera House or the Spanish Riding School; the oldest and last Riding School in the world where classic dressage is still practised in its purest form. 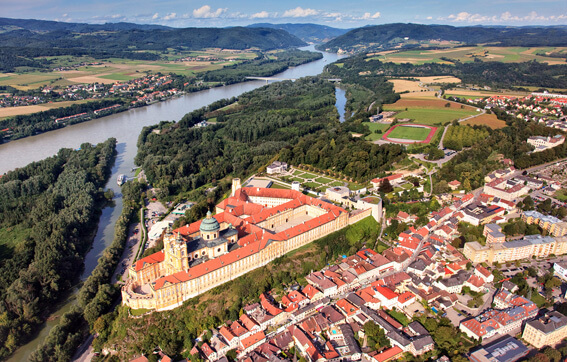 A short way along the Danube from Vienna is the UNESCO listed valleys of Wachau. Almost completely covered in vineyards, this picture-book forest area is home to some incredibly unique and marvellous medieval villages. The most famous of these villages is Melk, home to the iconic fortified monastery Melk Abbey. The yellow and cream baroque building is a famous Austrian landmark and world heritage site. It boasts magnificent halls and a library with medieval manuscripts along with a beautiful church that draws visitors from all over the globe. The town itself is not to be overlooked however with its cobbled lanes making for a pleasant stroll with a chance to discover its 16th-century Town Hall and the House at the Rock. Built in the 15th century, the vine-covered abode is Melk’s oldest building. The sister city to Melk in Wachau, and often considered more popular, is the city of Dürnstein. This picturesque area of Wachau is home to the ruined castle of Burgruine Dürnstein. This castle overlooks the river from atop a hill and is famed to have played home to Richard the Lionheart, when he was taken prisoner during the third crusade. 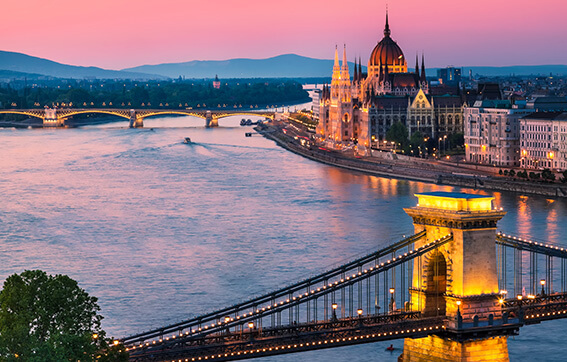 Cruising along the Danube into Budapest is truly a sight to behold. Towering spires, medieval domes and bridges form a skyline that is striking and awe-inspiringly beautiful. The Hungarian capital is a melting pot of ancient and modern cultures, hailing back to the time of the Romans and later the Ottoman empire with each civilisation leaving a lasting mark on the cities culture and architecture. Within the abundance of marvels that Budapest offers is the iconic world heritage site of Castle Hill. This plateau by the banks of the Danube is home to the remains of the Roman city of Aquincum and the Gothic castle of Buda. Within the walled area you can enjoy historic sites within the Old Town and the Royal Palace built by King Bela IV; the area is one of the most beautiful and romantic parts of the city of Budapest. On the UNESCO listings for Budapest you will also find Andrássy Avenue, referred to as the Hungarian Champs-Elysees. Built in 1896, this avenue is home to a collection of world-famous luxury brands and boutique parlous; it is an absolute must for anyone that loves to shop.

Passing through six countries, the Rhine River has been a link between North and Southern Europe since ancient times. Trailing down from the soaring heights of the Swiss Alps, the Rhine glides north through Europe’s third largest lake, Lake Constance, over the surging Rhine Falls and on through Germany, France and the Netherlands to the North Sea. Many Itineraries that travers the Rhine will complete the whole stretch between Basel and Amsterdam or vice-versa. Along the way they pass an abundance of breathtaking scenery and unique cultural highlights. Particularly along the borders of France and Germany where It traverses deep valleys famous for its vineyards and castles. 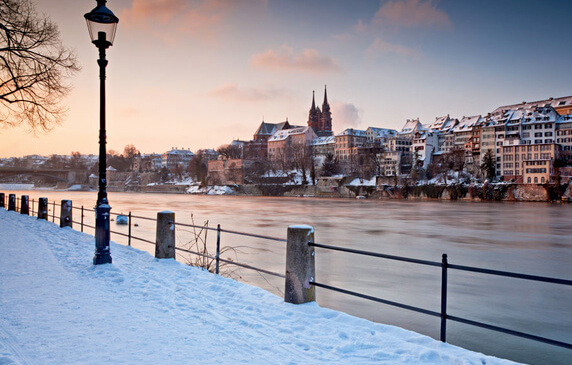 The beginning or end of many Rhine cruises, Basel is a true city of culture with a rich local history and the highest concentration of museums in Switzerland.  The medieval centre of the town invites you to explore the core parts of the city by foot, breathing in the atmosphere and vibrant local flair beneath the towering Romanesque-Gothic cathedral. The Basel Museum of Fine Arts is home to the world’s oldest art collection accessible to the public and the city also plays host to the country’s oldest university dating to 1460. Basel is truly a stone-wrapped wonderland for any art of history connoisseur and offers new and exciting sights around every corner. If history isn’t your thing there is no need to worry, Basel offers up a fine selection of modern marvels amongst the medieval cobblestones. In particular, the zoological gardens house six hundred animal species over eleven hectares of gorgeous gardens alongside exotic plants right in the heart of the city. 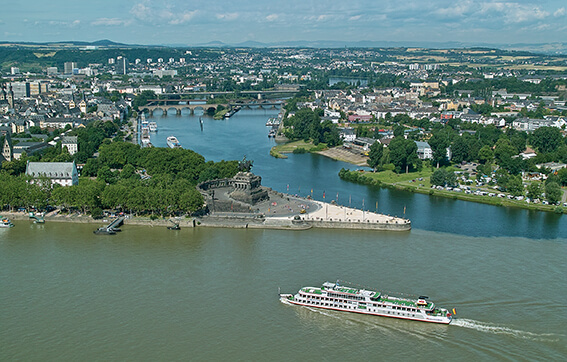 Most cruises along the Rhine will stop off in Koblenz, the famous Deutsches Eck or German Corner, where the Rhine meets the Moselle river. One of Germany’s oldest and most beautiful towns, Koblenz is the gateway to the wider Middle Rhine Valley. The Region between Bingen, Rüdesheim and Koblenz is a UNESCO listed region renowned for its quaint towns, castles and winegrowing villages. The region illustrates the long and varied human history of Germany, in particular the relationship the locals shared with the dramatic and picturesque natural landscape. The whole area is synonymous amongst European tradition and has had a powerful influence on the work of numerous writers, artists and composers.

The landscape is crowned by an incredible forty plus hill top castles and fortresses erected over the last thousand years. Although abandonment and war have left most just picturesque ruins of their former glory, the fairy-tale romance of a mysterious Medieval history just out of reach sets a marvellous tone for travellers. In times past the Rhine served as one of the most important transport routes in Europe, and the Middle Rhine Valley served as a meeting point between the Mediterranean region and the cold North. So you’ll find that the area is a unique romantic clash of cultures wrapped in the gorgeous natural landscape.

Back in Koblenz you should take your time to snap a shot of the famous statue of Kaiser William I overlooking the river’s meeting point. Or simply amble along the river promenade and get lost in the town’s narrow lanes, where you’ll see medieval churches, flower-filled parks, sidewalk cafes and perhaps a weinstube, or wine tavern, an ideal venue for sipping dry Riesling and drinking in the atmosphere of the German valley. 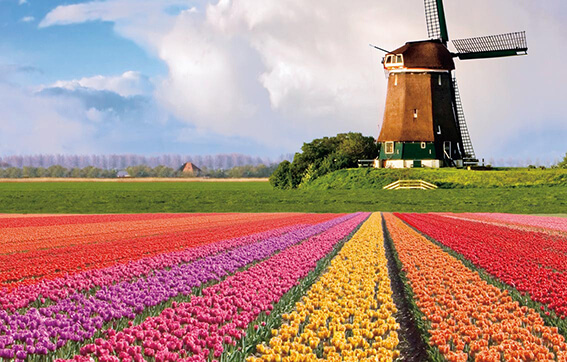 Amsterdam is a true gem for the European traveller and is conveniently situated at the other end of the Rhine from Basel. The Dutch capital is a vibrant mixture of the old and the new combing the mentality of a modern metropolis with the atmosphere and architecture of the 17th century. No matter how many times you visit Amsterdam, there is always more that you can see or do. From cruising along the winding canals and exploring the many museums to the fun of the Heineken factory or the infamous red-light district. Each of the cities many squares and narrow streets offers an experience to be uncovered. Some must see sights include the floating flower market, the Van Gogh and Rijksmuseum, the Anne Frank House, Dam square as well as the iconic Begijnhof.