Recently I had the pleasure of visiting Israel and Jordan. Both amazing places in their own right.

Israel is full of countless historic and religious sites, great cities and wonderful food and yet it only takes 6 hours to drive from north to south! Whether you are interested in the Crusaders or the Ottoman Empire or the rich biblical history, Israel has it all.

We visited Caesarea built by King Herod which is a magnificent site. Located on the Caesarea Aqueduct Beach which is one of Israel’s best beaches.  The harbor ruins are impressive. The restored amphitheater host modern-day concerts during the summer. The old city has an interesting range of shops and restaurants. 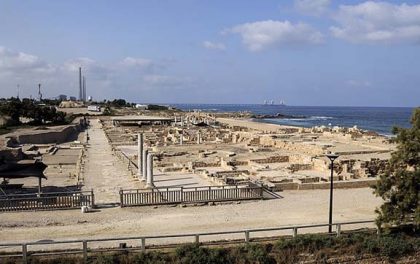 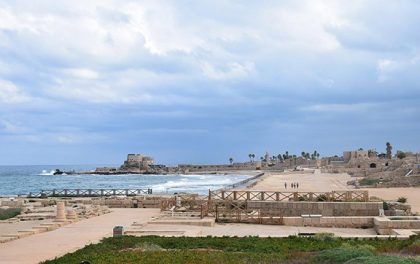 Israel’s coastline is stunning. The Mediterranean Sea is easily accessible with fresh fish to eat and countless places from which to enjoy the sunset. Tel Aviv is the cosmopolitan heart of Israel and known to be a fun loving resort! Akko is only an hours drive up the coast and is known to have the best hummus in the land. Akko has wonderful atmosphere surrounded by fortifications.  The walls wrap around the old city. Underneath the citadel is amazingly restored. I loved the contrast between the two cities. 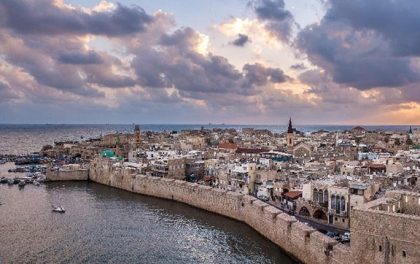 The area of the Sea of Galilee gives you a sense of the real Israel. It is a freshwater lake (the lowest in the world) It is 28km long and 10km wide. It is Israel’s main water source and has a huge religious significance. We stayed in seaside Tiberias and took a boat ride out onto the sea,  visited the 2000-year-old fishing boat and Peters house in Capernaum. From here you can also visit the River Jordan. 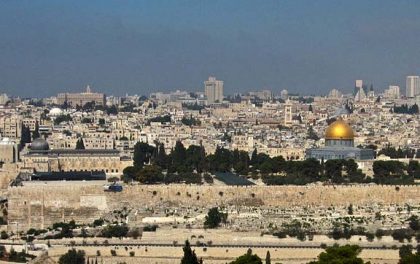 Arriving into Jerusalem is like no other city in the world. The cobbled streets have been witness to the most momentous events in history. There is something for everyone in this amazing city from the Mahane Yehuda markets to the Church of the Holy Sepulcher. It’s hard to comprehend the spiritual center of the world until you stand within Jerusalem and let yourself be transported in time. The view from the Mount of Olives is spectacular. Marvel at the western wall which is the last remaining wall of the Jewish Temple and the Dome of the rock which is so important for Muslims as the site where the prophet Muhammad is said to have risen to heaven. I loved walking around the streets of the old city and taking in the vast array of shops that contain all sorts of colorful items from trinkets to spices. Some of the shops are more like museums. I will admit that the jewelry and clay pots that are 1000’s of years old were impossible to resist! 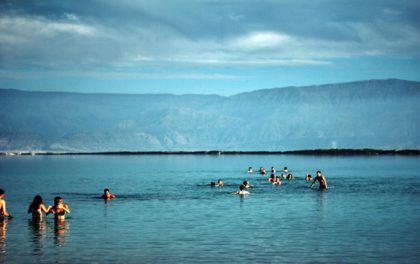 Then there is the eerie stillness of the Dead Sea, the lowest place on earth.  It has a beauty that is surprising and compelling with the natural mineral spas and water so salty that you float on top of it and nothing can live in it. We spent an afternoon being pampered in one of the local spas.

Masada is a rugged fortress overlooking the Dead Sea In the Judaean Desert.  It was the last stand of Jewish patriots in the face of the Roman army in 73 A.D. Built by Herod the Great this monument constitutes the most complete Roman siege works surviving to the present day. It is an emotional place to visit and so easy to imagine the last days of those brave families determined not to be taken by the Roman to be slaves.

It’s worth either flying or driving down to Eilat the barrier reef of Israel where its warm all year round and hardly gets any rain. Located right on the Red Sea it abounds with marine life and the underwater observatory is fantastic. The food and shopping are wonderful in Eilat. From here you can experience the Negev Desert and visit the amazing Timna park. Israel is well worth your time and an easy place to tour.

I was surprised at how easy the land crossing is. We were across in no time. I am not the only tourist to be drawn back to Jordan. I visited several years ago and am amazed at how many people have either already been or are planning a visit. The Jordanians are very friendly and love to talk about this fascinating country. 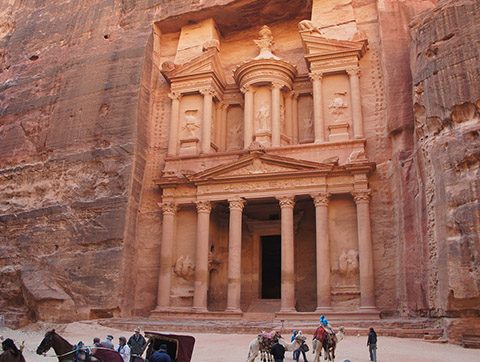 Of course, Petra is the main destination to visit. It is nestled in a secluded valley surrounded by rugged mountains. It’s amazing to think it was hidden from the world for so many years and only rediscovered in the 1800s and is now voted as one of the New Seven Wonders of the World. The anticipation builds as you walk (there is an option of a cart but it looks very bumpy and the poor horses look positively miserable!) the narrow 1.2km gorge known as the Siq and there is no disappointment with your first sight of the incredible façade of Al Kazneh or also known as the Treasury famously featured as the Holy Grail’s last resting place in the film Indiana Jones and the Last Crusade. Around the corner are ancient tombs, temples, royal tombs, public buildings and a vast Amphitheatre. You can also do a steep walk up to the Monastery which takes about an hour. 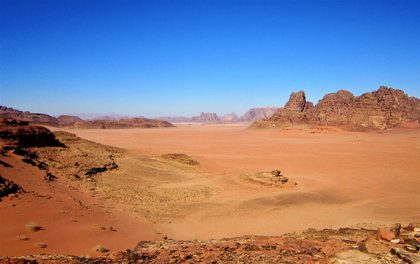 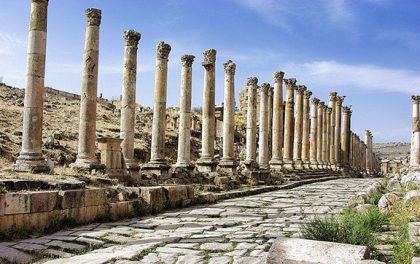 We spent a wonderful day at Wadi Rum home to the semi-nomadic Bedouins who live in goat hair tents, look after sheep and goats and preserve a lifestyle that has been practiced for centuries. We did the drive through the stunning desert in a jeep and watched the sun set followed by a tradition Jordanian meal at camp. It was one of our highlights of the trip.

Jerash is located less than an hours drive from Amman and is one of the most visited cities in the Middle East. The ruins are exquisitely preserved from the first century AD. You can imagine a flourishing city under Roman rule.

We loved the food in Israel and Jordan. There is nothing quite like falafel from the old city of Jerusalem with freshly made hummus. Everyone should try Jordan’s traditional dish Mensaf, which is lamb and yogurt served with rice and of course is best enjoyed in traditional surroundings. 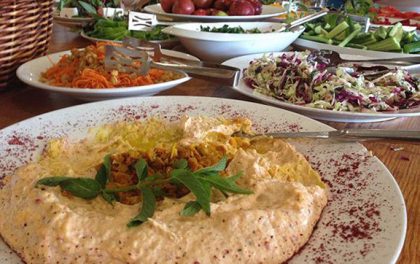 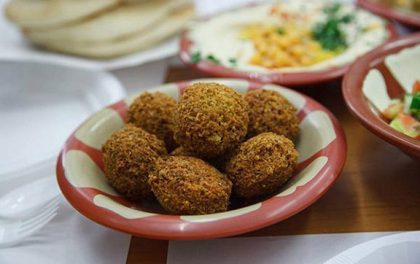 You are spoilt for choice in places like Jerusalem and the Dead Sea. A couple of suggestions where you can’t go wrong would have to be: