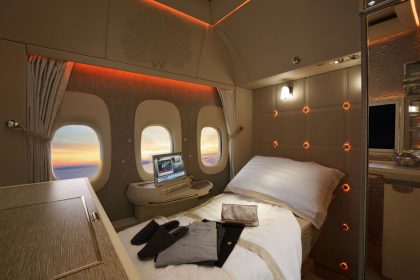 Ever pioneers of new innovations in commercial aviation, Emirates’ latest development could make windows on aircraft outdated as the airline reveals windowless suites aboard their latest first class offering.

Emirates asserts that the move will pave the way for other airlines to follow suit as the prospect of lighter and faster aircraft improves operations, potentially saving airlines money on fuel.

Speaking to the BBC, Emirates president, Tim Clark said, “Now you have one fuselage which has no structural weaknesses because of windows. The aircraft are lighter, the aircraft could fly faster, they’ll burn far less fuel and fly higher."

But there are concerns for safety as crew need to be able to see outside in case of an emergency and for safe evacuation. Being able to see the ‘real’ outside means airline crew can see potential problems with wings or engines.

Aviation safety expert, Professor Graham Braithwaite from Cranfield University told the BBC, “Flight attendants would need to check outside the aircraft in an emergency, for example for fire, before opening a door and commencing an evacuation – and anything that needed power to do this may not be easy to get certified by an aviation safety regulator."

But the European Aviation Safety Agency argued, “We do not see any specific challenge that could not be overcome to ensure a level of safety equivalent to the one of an aircraft fitted with cabin windows."