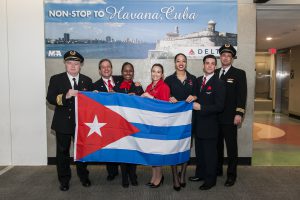 Delta commenced its daily non-stop service to Havana, Cuba on December 1 which departs from Miami, New York-JFK and Atlanta. It was the first time the airline returned to the Cuban capital city in 55 years.

In 1961, Delta’s passenger service was suspended because of the volatile political climate in Cuba which subsequently proved an unprofitable destination for the airline. Up until then, Delta was the only US carrier to operate a passenger service into Cuba and was the last to leave the Cuban market with its Havana to New Orleans service.

The first official regularly scheduled passenger flight since then now departs Miami International Airport at 0859 as Delta flight 625, arriving at José Martí International Airport in Havana just after 1000. The New York-JFK and Miami counterparts will arrive just before noon and 1330 on flights 448 and 639 respectively.

Delta is one of eight airlines to be granted authority by the Department of Transportation to serve Havana, for which flights started being sold in September, and Delta also became the first airline to sell tickets from Havana to the US from its own ticket office in downtown Havana. Delta will have nearly 3,000 seats available weekly from the US to Cuba.

President of Global Sales for Delta, Steve Sear has thanked the officials and authorities responsible for the resumed Delta passenger service as well as the Delta team who have worked ‘tirelessly this past year to add that dot back to our route maps after its absence for more than half a century.’

On-board, passengers can expect refreshment and free (but limited) in-flight entertainment and Wi-Fi. All three departure cities will also offer Delta Sky Clubs with upgraded food and beverage options as well as SkyPriority lines for expedited check-in and boarding.