Crystal Mozart has just embarked for the first time on her spectacular voyages along the Danube River! The luxuriously re-imagined river ship offers travellers exclusive amenities and experiences for which Crystal has long been celebrated. Crystal River Cruises recently officially announced the latest in these extraordinary experiences in the form of Michelin-starred restaurant events, offered only for Crystal guests in Vienna and Budapest. On each Crystal Mozart voyage, guests will be treated to one complimentary culinary event at a restaurant recognised by the refined Michelin organisation, each carefully selected by Crystal’s equally refined culinary experts.

Guests may choose one complimentary superlative experience from a selection of seven Michelin-starred restaurants, with the option of reserving further experiences at an additional cost. Crystal’s vice president of food and beverage, Toni Neumeister, has worked closely with the acclaimed chefs and Crystal’s own culinary teams to craft culinary events and menus especially for Crystal Mozart guests.

“Of course, cuisine and the customs surrounding it are significant to any travel experience, and we are delighted to offer our guests some of the best culinary experiences in the world as part of their Crystal Experience," says Edie Rodriguez, Crystal’s CEO and president.

Le Guide Michelin is a world renowned restaurant reference guide, which awards stars for excellence and innovation in cuisine and presentation. The renowned Michelin-starred locales available to Crystal Mozart guests are:

Le Ciel (Vienna) – Spectacular city views and an award-winning reputation are two of the many highlights of what is known as one of Vienna’s best gourmet restaurants. Cuisine by Toni Mörwald showcases the kitchen’s creative finesse with the highest quality ingredients.

Edvard Restaurant (Vienna) – Celebrated for artful dishes of the finest local meat and fish Chef Anton Pozeg blends the modern and classic beautifully. Dishes are accompanied by a wine list that is nearly as illustrious as the cuisine.

Tian Restaurant (Vienna) – One of only four vegetarian restaurants to receive a Michelin star, the venue offers creative, colourful fare, each dish its own work of art.

Winekitchen Restaurant (Budapest) – Also known as Borkonyha Wine Restaurant, this cozy bistro boasts a deceptively unpretentious atmosphere. Classic Hungarian cuisine is served with style and elegance, earning it “favourite" status among most who dine there.

Costes Restaurant (Budapest) – The posh eatery is a go-to spot for top international cuisine with a Hungarian flair, and also the first Hungarian restaurant to be awarded the coveted star.

Costes Downtown Restaurant (Budapest) – The downtown counterpart to Costes boasts a menu centred around the day’s local market selections, as determined by the chef, and earned its star less than a year after opening in 2015. 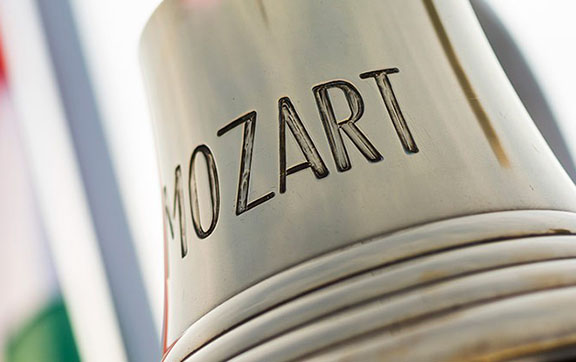