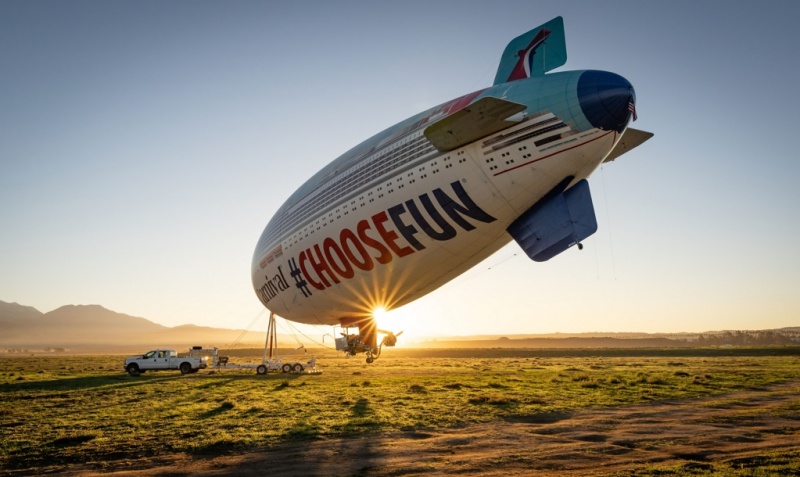 Carnival’s AirShip has made its debut in Southern California, starting a month-long tour of the state, according to a statement.

The promotion is part of Carnival’s West Coast push, which will see the Carnival Panorama debut out of Long Beach in December 2019.

The 120-foot-long AirShip will fly over and visit culture and entertainment locations across the state throughout January including The Rose Parade: A Showcase of Floats on Jan. 2 as well as sporting events; local schools; Carnival’s homeports in Long Beach on Jan. 5, San Diego on Jan. 13 and San Francisco on Jan. 25; travel agent viewing parties; and select Sky Zone trampoline park locations, Carnival Panorama’s newest all-ages attraction, starting with the Anaheim location on Jan 11.

In conjunction with the AirShip’s California tour, consumers have a chance to win a free cruise as well as additional prizes each week throughout the month of January, Carnival announced.

For anyone who takes a picture of the AirShip and posts it on social media with the hashtag #ChooseFun, Carnival will make a $2 donation to its longtime charity partner St. Jude Children’s Research Hospital up to a maximum donation of $20,000.

This past summer, the AirShip made its inaugural journey in the southeast U.S. to celebrate the arrival of new ships in multiple homeports.

“The Carnival AirShip was so well received when she debuted earlier this year, and we’re delighted to bring her back to the West Coast to kick start our year-long celebration of Carnival Panorama. It’s officially go-time!" said Christine Duffy, president of Carnival Cruise Line. “Carnival is the number one cruise line from Southern California. Our AirShip is a great way to let everyone know about the many exciting choices for guests to Choose Fun from the West Coast."

The Carnival Panorama will debut with a special three-day cruise from Long Beach on Dec. 11, 2019, followed by the launch of year-round, seven-day Mexican Riviera sailings on Dec. 14, 2019.