Air pollution caused an estimated 6.1 million deaths worldwide in 2016 according to the Health Effects Institute, with many of those in Asia, a result of burning coal, vehicle fumes, chemicals and wildfires. It’s the world’s fourth deadliest killer. 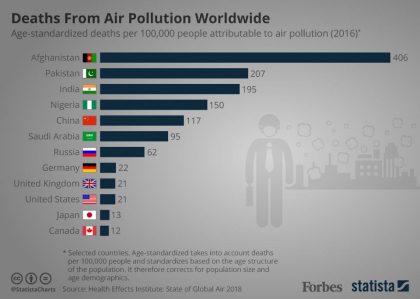 Besides staying indoors or wearing tight-fitting smog masks, or avoiding destinations with excess pollution, the answer lies with people and governments to reduce the amount of air pollution created.

For this article we have quoted the Air Quality Index (AQI) which adopts the United States Environmental Protection Agency AQI reporting system and goes from 0-500. The lower the AQI score, the cleaner the air. It records air pollution in real time so figures can go up and down. We have also listed the air pollution measurements of PM2.5, the solid particles and liquid droplets in the air such as dust, ash and sea spray. The World Health Organisation’s guideline for PM2.5 is 10 μg/m3 and under. 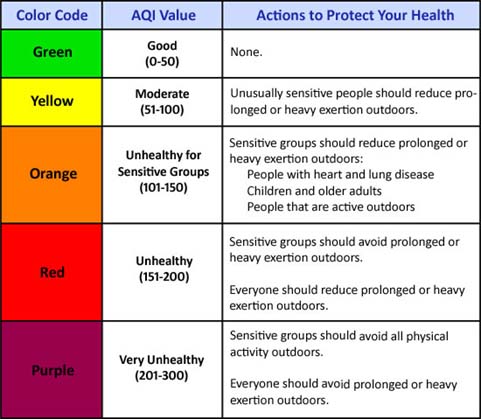 Bangkok, the world’s most visited city which received 20.5 million visitors in 2018, is renowned for its tuk tuks, nightlife, cheap holidays and, of course, pollution. Sukhumvit, one of the main traffic-choked roads in the city, where myriad shopping malls, hotels, restaurants and bars are located, had an AQI of 108 and a PM2.5 of 38.2 μg/m3 (Sukhumvit 23). Ironically, Lumphini Park, the lungs of the city, must be suffering from a respiratory disease with its AQI of 127 and PM2.5 of 46 μg/m3. Not many tourists, however, are aware that the northern city of Chiang Mai is one of the most polluted areas in Thailand, more so than Bangkok. In March this year, The Bangkok Post reported it as being the most polluted city in the world due to haze from forest fires, with an AQI of 230. It had an AQI of 152 and a PM2.5 of 57.7 μg/m3 at the time of writing.

Phuket according to travel insurance Columbus Direct, has the highest number of visitors per square mile than any other tourist destination in the world with 9.2 million tourists to its shores per year. It’s not surprising then that at the time of writing it had an AQI of 114 in the west, classed as unhealthy for sensitive groups, and a PM2.5 of 21 μg/m3. The good news, however, is there was nearly twice as much clean air on the east coast with an AQI of 59 and a PM2.5 of 16 μg/m3. Kho Samui, sitting in the Gulf of Thailand, had a surprisingly clean air reading of AQI 34 and 8.1 μg/m3, especially considering its built-up appearance, island airport and 2.7 million tourists annually.

Air pollution across Indonesia in 2019 has been the worst since the last major haze outbreak in 2015, which was linked to 100,000 premature deaths in Indonesia, Malaysia and Singapore. The figures, according to a Harvard University study, are the result of farmers clearing areas for regeneration using illegal slash-and-burn techniques on a huge scale each dry season. Although it mainly takes place in Sumatra, and Bali is 1,100 miles south, it depends on the wind direction as to how the smoke impacts Bali each year.

At the time of writing, Kuta Selatan had the worst air pollution with an AQI of 142 and a PM2.5 of 52.4 μg/m3 (the popular Kuta beach is just a short walk away). Denpasar had an AQI of 139 and Ubud 139. Buleleng in the north of the island, had the cleanest air with an AQI of 53. The island is currently mulling over introducing a USD$10 fee per tourist to go towards environmental costs but these are expected to be land based rather than air based.

It’s the world’s fifth-most visited country where you can expect to walk through the city’s cloud forest in the country’s Gardens by the Bay and wander to the iconic Marina Bay Sands resort, which can be seen for miles if the haze isn’t thick. The air in Singapore, though, isn’t as clean as you might expect, considering there are myriad laws for other keep-the-city-clean initiatives such as a ban on chewing gum. Similarly with Bali, the air pollution can depend on the forest fires in western Indonesia. At the time this article was written it had a moderate AQI of 61 and a PM2.5 reading of 16.9 μg/m3.

The States has some of the cleanest air, which is hardly surprising considering the vast size of the country and national parks. That said, the Californian wildfires in 2018 saw pollution levels reach an AQI of 200 in San Francisco which was 200 miles away from where the fires were most intense.

China’s major cities are often thought of as pollution hubs and just six years ago Beijing recorded AQI concentrations from 700 to 900, which is nearly twice the top measurement of the AQI monitor (anything over 500 is off scale). The government pledged to tackle the country’s pollution by banning new coal plants surrounding Beijing and heavily populated conurbations as well as forcing the closure of plants causing the worst pollution. At the time of writing, the city had an AQI of 170 and a PM2.5 of 91 μg/m3; Shanghai had an AQI of 70 while Hunan province had hazardous AQI levels reaching 350. Along with India, China has some of the most polluted cities on earth.

Taiwan’s population is scattered around the rim of the island while the inner is mountainous and green. The AQI on the island ranged from 21 in Langtan on the west to 152 in Kaohsiung in the south.

New Zealand is renowned for its outdoors pursuits, small population and incredible landscape. Now you can add in the stupendously clean air. Queenstown, famed for its skiing and hiking had an AQI of 7 and there was even an AQI of 1 recorded further south in Invercargill; Christchurch ranged from an AQI of 0 on the outskirts to 23 in the centre; Wellington had an AQI of 23; while Auckland, the most populous city, had an AQI of 13, and surprisingly Napier, the wine producing area, had an AQI of 52 and a PM2.5 of 12.7 μg/m3.

The Transport and Environment group took Europe’s top city break destinations and determined just how polluted the air was. Spending a long weekend during summer in the top 10 cities, according to the European group campaigning for clean transport, is the equivalent to smoking several cigarettes. London, once called the Big Smoke, is the second most visited city in the world. Even with low-carbon emission zones and promoting cycling, it’s still pretty polluted. 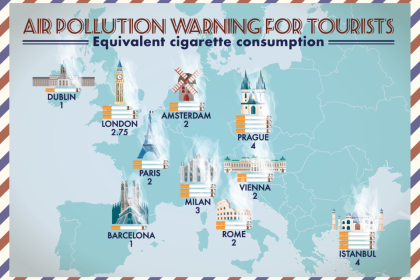 According to Green Match, a green energy comparison site, Turkey ranks as the worst country in Europe for air pollution with an overall recording of 41 ug/m3, whereas Sweden has the cleanest air with 6 ug/m3. 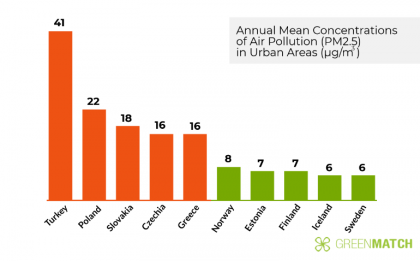 These are the top four countries with clean air:

You might also want to try out the Arctic Circle and sparsely populated islands for a breath of fresh air.

According to Air Visual, these were the five most polluted countries in 2018:

At the time of writing, Sydney had an AQI of 106, outdoing Shanghai, New York and not far behind Bangkok for pollution, due to bushfires.