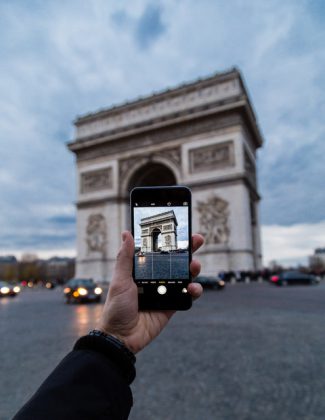 Whilst travelling, you can stay connected from your own phone without the nightmare phone bill that some travel stories are made of. With the right plan, how much data you use and how much your phone call home is costing you, is one less thing to worry about whilst abroad. In light of this, we’ve rounded up some of the best mobile phone plans for overseas travel.

The major players offer roaming plans with rates for specific countries. These include Optus, Telstra, and Vodafone, but it’s worth noting that Woolworths Mobile has travel plans, whilst Australia Post have travel SIM cards available.

Roaming is usually the most convenient option; it’s easy to set up as your provider will do most of the work for you. Other than Pay As You Go Roaming, you can opt for roaming packs, a travel SIM card, or a phone plan. Just bear in mind that obviously more convenience means more costly, but certainly better than contending with free unstable Wi-Fi at a cafe in a non-English speaking country where the connection is not secure.

(Information from respective provider websites; lease check prior departure as rates are subject to change)

Roaming packs can be purchased prior to your departure from any major Australian phone provider. There are smaller carriers that may offer more competitive prices, so check with your own provider if they can present a counter-offer.

You can buy an Optus Travel Pack ahead of time for an extra $10 per day which will be added to your current phone plan. This pack comes with unlimited talk and text, and 100MB of data for Zone 1 countries (regions include North America, New Zealand, much of Asia, and most of Europe including Russia). You can pre-purchase a number of these and pool your data. Activation is via your ‘My Account’ online or through the Optus mobile app.

If you’re not on a phone plan, you can recharge with ‘Travel Credit Add On’ which requires a minimum of $20 top up. The standard rates apply, and you can track your usage online or via the Optus app.

With Telstra’s ‘International Day Pass’, you can access your existing phone plane whilst abroad for either $5 or $10 per day; New Zealand for $5 per day, and other countries, such as the US, Canada, Brazil, and China, as well as most of Europe and Asia, for $10 per day.

Vodafone has very competitive rates for roaming, with its ‘$5 a day’ option proving to be extremely popular with travellers. For this $5 per day option you can unlock the roaming inclusions that come with your phone plan which applies to 55 countries including North America, Brazil, South Africa, parts of Asia, and most of Europe.

If you signed up for your phone plan before 23 April 2014 however, you have to login to to your ‘My Vodafone’account and activate there. If you signed up after this date, you don’t have to do anything.

If you go over these allowances, then the PAYG rates apply and the regions in which you can access roaming are limited to the US (Canada is not included), much of Europe, and only some of Asia. Recharge is extremely convenient by simply dialling 1511.

Global SIM cards are a very handy way of staying connected whilst jet-setting; you simply insert into your unlocked phone and only pay for what you need. There a few private providers that offer travel SIM cards to help you decide the best mobile phone plans for overseas:

The ‘TravelSim’ from Australia is post is a very popular product. For $25 you get some starter credit and free express shipping. A megabyte of data is priced at 25c as is a minute of calling and per text; rates which apply to over 200 countries with free TravelSIM to TravelSIM texts. You can track your usage, recharge and troubleshoot via the app, and 24/7 customer service is available as is offline mapping. The SIM is tri-cut in nano, micro, and standard sizes.

Woolworths Mobile Global Roaming SIM has some great options. With the purchase of a SIM card, you’ll get a new number and it works just like a prepaid plan. The base price is $29 which comes with $10 worth of credit included.

Is it worth getting a SIM from the country you’re in?

So what’s the best mobile phone plans available from your destination country? Contending with Australia’s 30+ providers is mind-boggling enough without having to deal with all the other providers in the country you’re visiting, especially when you throw the language barrier in the mix. Purchasing a native prepaid SIM from the country you’re visiting can take a bit a of work, and if you have the time, it can be quite advantageous. You’ll have access to local rates and inclusions and make your pre-purchased credit last longer.

There are three main providers in New Zealand: Vodafone and Spark are the largest networks, whilst 2degrees has a smaller coverage area.

Pick up a Vodafone SIM from Auckland and Christchurch tax-free, and roam for free on the Vodafone network as needed. Sparks (also owns the Skinny brand) offers the same deal as Vodafone with 1GB of free Wi-Fi per day thrown in which can be accessed from its 1000+ hotspots nationwide.

The US has five mobile networks offering the best mobile phone plans: Verizon, AT&T, T-Mobile, Sprint, and US Cellular. Based on the number of subscribers, Verizon is the largest network, but all providers offer competitive plans. They also all have shopfronts which you can easily drop into to purchase a prepaid plan and chat to a representative to discuss which plan would best suit you.  In addition, all 7/11 stores sell a variety of prepaid phone SIM cards that could also be quite competitive.

There are also five major networks in Canada that offer the best mobile phone plans: Rogers, Telus, BCE, Shaw, and RuralCom. In Canada, most mobile phone plans are province specific where one network might work in Ontario but in Nova Scotia (for example). But if you stick to the ‘big 5’ you’ll have access to their expansive network of shopfronts which can be found in most provinces.

On most plans with these major providers, you can get 1GB and unlimited talk and text for usually around CAD $40. Prepaid SIM cards are also available in most convenience stores.

The UK has four major networks: EE, O2, Vodafone and 3. They generally offer 1GB of data with unlimited calls and texts for around £20 per month. The great thing about the UK is that their best mobile phone plans can be used in most continental European countries without roaming charges!

These providers have shopfronts throughout the country where you can grab a prepaid SIM. Convenience stores also supply SIM cards as well as ‘Off Licences’.

When it comes to other countries, finding the best mobile phone plans can get a bit challenging. You’ll need to do quite a bit of legwork to find the best deals on plans but the work can pay off with a cost-effective deal that won’t break the bank and leave  you with a nasty surprise on your phone bill upon your return.