There are only a handful of all-business class flights that take to the skies. One of these is British Airways’ flagship BA1 service from London to New York.

BA1 is a single-aisle Airbus A318 which inherited the flight number of its great predecessor, the Concorde, which also jetted between London and New York in the 1980s.

Also known as the ‘Baby Bus’, BA1’s A318 is the smallest aircraft in the A320 fleet, with just 32 business class seats across eight rows. The 2-2 arrangement means direct aisle access is not possible at every seat but if you’re on a quiet Sunday morning flight, chances are you’re probably going to get a pair of seats to yourself.

The seats themselves are not anything like you would find on BA’s most recent business class products and therefore lacks any of the next-gen mod cons but they do unfold into flat beds when you’re ready for sleep. Instead of personal touchscreen entertainment systems, iPads are provided although most passengers prefer to use their own personal devices. 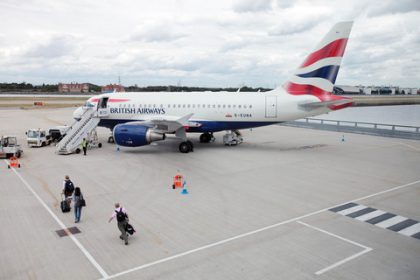 London City Airport is only a small airport and does not have lounges. BA1 passengers are given a complimentary meal at the Pilots Bar & Kitchen restaurant. It’s an all-business class flight so there’s no priority boarding and passengers can arrive for their flight up to 15 minutes prior to departure.

This actually works as an advantage for business travellers as United States passport control and customs are all cleared on the ground at Shannon while the aircraft is refuelled. Passengers then arrive in New York’s JFK airport as domestic travellers and can breeze through the airport.

Inflight, champagne and sushi are served during the quick hop between London City and Shannon. Lunch is served on the seven-and-a-half-hour flight between Shannon and New York, with BA’s trademark afternoon tea served just prior to touchdown.

Passengers arrive in New York at dinner time with the return journey being a non-stop overnight flight on BA2.