In the spirit of the festive season, we thought we might cast the spotlight on some of the most popular festivals in a country that really knows how to throw a ‘fiesta’! If you’ve got Spain on your list of places to visit in the new year, here are a few events you might want to add to your itinerary. And if you haven’t planned a visit to this part of the Iberian Peninsula in 2017, perhaps these Spanish festivals will convince you to do so.

Les Festes de la Mercé, or La Mercé, is the annual festival of the city of Barcelona in Catalonia. Held in honour of the patron Saint, La Mercé (the Virgin of Mercy), the ‘fiesta mayor’ – the main festival – is held on the 24th of September every year but is celebrated for an entire week. It is the largest and most colourful climax to the Spanish festivals calendar which features human towers (Castellers), a procession of fire-breathing dragons (Carrefoc), and a parade of giant figures (Gigantes). These are just some of the events La Mercé is famous for but there up to 500 different events taking place mainly in the city centre.

Held in the Valencian town of Buñol, La Tomatina festival gives new meaning to painting the town red. Taking place on the last Wednesday of August, people from around the globe participate in the week-long festival that features music, parades, dancing, and fireworks. It culminates in an hour-long food fight as thousands of revellers throw tomatoes in a harmless battle where more than one hundred metric tonnes of over-ripe tomatoes are thrown in the street. If you don’t fancy ‘seeing red’, perhaps the paella cooking contest the night before the tomato fight is more palatable and certainly less slimy! 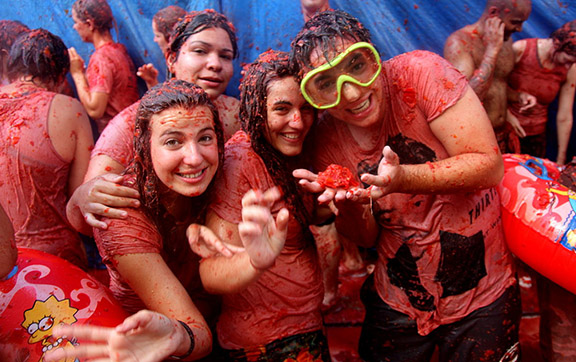 This is one of the most unique and amazing Spanish festivals where the entire town of San José inValencia is set ablaze! From the 15 – 19 March, this ‘super-festival’ attracts many foreign, as well as Spanish, visitors to take part in a riotous week of city fires, explosions and parades in honour of Saint Joseph. Meaning ‘the fires’, ‘Las Fallas’ refers to both the celebration and the burning of ninots (puppets or dolls) which are huge statues made of cardboard, wood, paper-maché or plaster. A major highlight of the event is the daily mascletá, an orgy of thunderous string-lined firecrackers which are ignited in the Plaza Ayuntamiento at exactly 2pm.

The Carnival of Santa Cruz de Tenerife is the most popular in the Canary Islands and is also second in popularity and participants in the world behind the most well-known carnival in Brazil’s Rio De Janeiro. Dazzling costumes and endless dancing are what these festivities are about, with competitions such as the Gala Reina (selection of Carnival Queen) and Drag Queen of Carnival taking centre stage. Held in February, you can join in the fun by partaking in the parades dressed over-the-top in drag or as your favourite character, or enjoy the open-air parties that feature live entertainment and non-stop Latin and Salsa music. If you’re going to attend one of the Spanish festivals, you won’t want to miss this one!

Marking the summer solstice, the festival of San Juan is one of the most remarkable Spanish festivals, celebrated annually on the 23rd of June, is one big bonfire party. Celebrations vary around Spain, but the largest party takes place in Alicante. The bonfires of Saint John are lit in cities all around Spain especially on beaches and coastal areas. As tradition goes, jumping over a bonfire three times on la noche de San Juan (the night of San Juan) will cleanse and purify you of your problems as they are burnt away in the fire. If you want to join in less dangerous traditions though, splashing in the waters of the Atlantic at midnight is said to have the same purgative effects. There’s also the tradition of preparing perfumed water if neither extreme appeal to you.

The running of the bulls in Pamplona is what makes the festival of San Fermin, or Los Sanfermines, one of the most famous Spanish festivals world-wide. The celebrations begin on the 6th of July but from the 7th to the 14th at 8am every morning the streets are taken over by bulls and bull-runners. But Los Sanfermines is not just about the encierro (running of the bulls), it is a nine-day celebration where the Pamplona comes alive with music, fireworks, folkloric events, dancing, singing and religious ceremonies. The festival kicks off with a launching of a rocket (el chupinazo) and ends with everyone singing a sad farewell song called ‘probe de mi’ (poor me) to convey the sorrow of the end of the festival and the yearning for next year’s festivities.

It seems Spanish festivals love their food fights as this is another one but this time with flour and eggs. Every year, to mark the biblical Massacre of the Innocents by King Herod, the people of Ibi in Alicante dress in military clothes and stage a mock coup d’etat. On 28th of December each year, participants pelt each other with flour and eggs and let off firecrackers and fire extinguishers. It’s a 200-year old tradition where a group of men known as the ‘floured ones’ (Els Enfarinats) stage a revolution against the authorities and take control of the village for the day and impose silly laws, fining citizens who oppose them. The opposition (La Oposicio) retaliate and try to save the day. Thousands of eggs and hundreds of kilograms of flour are thrown but all for a good cause as money from the ‘fines’ are donated to charity.

Just in case you haven’t had enough of hurling food at people, on the weekend of the last Friday in August yearly, just days after La Tomatina, is the annual Grape Throwing Festival La Raima. Celebrated in La Pobla del Duc, Valencia, truckloads of 40-50 tonnes of local Garnacha Tintorera drive into La Plaza Cooperativa (the main square) and, as the church bells strike 12 noon, proceed to launch the grapes at each other. The festivities mark the end of the grape harvest and also promotes the region’s wine-growing tradition of which around 70% of the population relies on.

On the 29th of June, every year, in the town of Haro in La Rioja region, which is famous for its Rioja wine, the biggest wine battle in Spain occurs at the Haro Wine Festival. It all begins at 7am with a procession where partakers dressed in white shirts and red scarves carry anything that can hold wine, and make their way to a church in the Bilibio cliffs. After mass the battle explodes where litres upon litres of wine is despatched in a massive free-for-all wine fight. Once everybody is drenched and the masses turn into a sea of purple bodies, at around noon the party continues at Plaza de la Paz where snails are eaten and heifers are chased around a bullring.

Fireworks at midnight signals the official grand-soaking of around 20,000 people at one of the most amazing Spanish festivals, the Fiesta Del Agua y Jamon (festival of water and ham). The Andalusian town of Lanjaron is, ordinarily, a peaceful spa town but as part of the San Juan festivals on the eve of the midsummer equinox, it erupts into a mass of colour, music, tapas, and bucket loads of water. The fire brigade starts it all off by opening their hoses on the water vessel-wielding crowd in an incredible soaking action that lasts for an hour. Then the doors of the bars are flung open and free beer flows. The festival is held from 23rd – 25th June. Check out this amazing 24 Hour Beer delivery London, Surrey, Kent & Middlesex. They deliver same day and within 30 mins!

Commemorating the patron saint day of Madrid, San Isidro, this festival is held over 5 days in May. The locals dress in the traditional costume of Madrid to celebrate everything typical and traditional of the capital city which has conserved so much of its popular customs, including authentic food, music and of course, bullfighting. The bullfighting held in the Las Ventas bullring draws prominent names in bullfighting. On the morning of the 15 of May, crowds gather at La Padrera of San Isidro to join the pilgrimage to the shrine of the saint and it is here where most of the festivities take place. There’s plenty for the whole family and most of the activities are free!