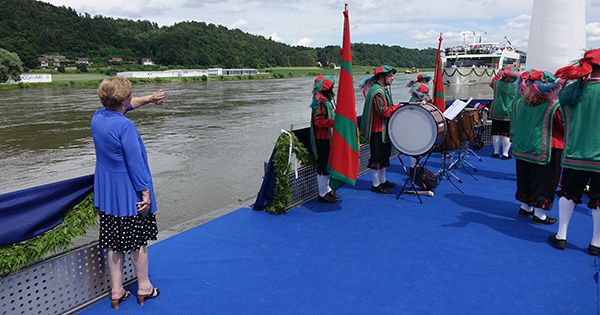 AmaWaterways and APT christened AmaViola in the Bavarian town of Vilshofen this week.

Despite the partly cloudy skies, everyone was in a celebratory mood as Godmother Jackie Friedman, president of Nexion travel agency, smashed a bottle of champagne on the river boat’s hull.

“This is emotional," Friedman said as she stood on the dock in Vilshofen and waved AmaViola into port, kicking off the ceremony. Passengers, finishing up a seven-night Danube River cruise, waved back from the boat’s top sundeck as a Bavarian band played. Those onboard then disembarked to join a crowd that included shipbuilders, ship crew, local politicians, travel agents and media. As passengers filed off the boat, they shook hands with Karst and Schreiner, offering congratulations.

First, Schreiner took the stage to thank those in attendance, switching between English and German and thanking people in the crowd, including the builders who design the ship’s exteriors in Belgrade, as well as the designers who craft the interiors in the Netherlands.

He then relayed a conversation he had with his wife, Karst: “Today, she told me we need to build them faster." AmaWaterways has been building ships at a pace of about two a year; Karst often speaks of the line’s focus on quality over quantity.

Friedman spoke of her fondness for river cruising, which dates to her first river cruise on AmaCello in 2008 and thanked her family and colleagues, several of whom were in attendance. At the conclusion of Friedman’s speech, Karst presented the godmother with a gift of jewelry. 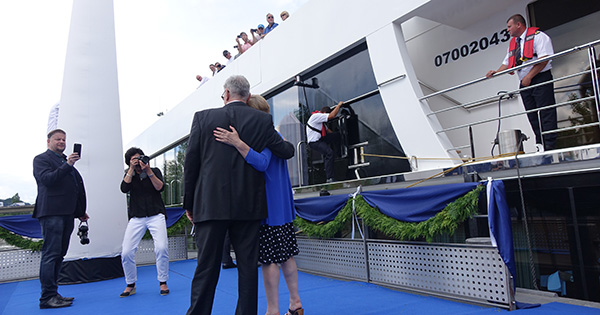 Vilshofen Mayor Florian Gams followed, saying, “May there always be a hand of water under the AmaViola," and introducing a band, which performed a song specifically written about the new ship.

Finally, it was time for the main event, and the crowd moved from under tents to line the area around the boat to watch as it was christened.

“I christen this beautiful ship, AmaViola," Friedman said, before breaking the bottle against the side of the ship.

With the sounds of breaking glass still in the air, the sky opened up and rain poured down.