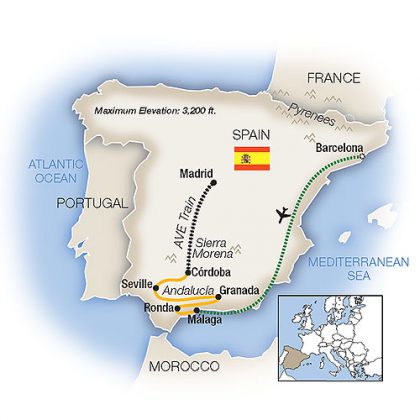 Barcelona is an exceptional city overflowing with history, art and culture. Walk with your local guide along famous Las Ramblas to the Plaça del Pi; explore the Gothic Quarter (Barri Gotic) to get a good look at the 13th-to-15th-century architecture; see the city’s spectacular cathedral. Drive to seaside Montjuic, site of the 1992 Olympics, and visit la Sagrada Família, the fanciful, unfinished cathedral designed by Antoni Gaudí I Cornet. Discover Barcelona as you please for the remainder of the day and evening.
Meals Included: Breakfast
Accommodation: Le Meridien Barcelona

To Granada via Málaga & Ronda

From Barcelona, Tauck’s Spain holiday continues with an included morning flight to Málaga; take a drive along mountain roads to clifftop Ronda, home to one of the oldest bullrings in Spain. A local guide shares insights about the town’s historic architecture and double-layered arched viewing stands of the bullring on a walking tour. Following lunch at Parador de Ronda, continue to Granada, a jewel of the Sierra Nevada foothills in southern Spain, where you’ll enjoy an à la carte dinner with wine at your palace hotel tonight.
Meals Included: Breakfast, Lunch & Dinner
Accommodation: Hotel Alhambra Palace

From the Alhambra to Seville

Join us for an insider tour of the 14th-century palaces and gardens at the Alhambra this morning. Explore the massive Renaissance palace of Charles V and the lush fountain-filled gardens of the Generalife. After lunch it’s on to Seville via Andalucía, a melting pot of different cultures sometimes referred to as the bridge between two continents. Journey into Andalucía’s rolling hills and view charming villages with whitewashed houses clinging to the hillsides. Continue on to romantic Seville, where your Spain holiday continues this evening with a private performance of flamenco dancing and dinner. Spend the next two nights at the Hotel Alfonso XIII in the heart of Seville, which enjoys a reputation as one of the world’s finest hotels.
Meals Included: Breakfast, Lunch & Dinner
Accommodation: Hotel Afonso XIII

No Spain holiday would be complete without a visit to charming Seville; get your bearings on an orientation tour of this spectacular city dating back nearly 2,000 years. A horse and carriage ride transports you through Maria Luisa Park, before a walking tour of the Barrio de Santa Cruz and the maze of old streets in the former Jewish Quarter. Enjoy a guided tour of Seville Cathedral, the third-largest Roman Catholic church in the world; tour the Cathedral, the final resting place of Christopher Columbus and home to the famed Giralda Bell Tower. The remainder of the day is free for you to pursue what interests you most in Seville.
Meals Included: Breakfast
Accommodation: Hotel Alfonso XIII

Córdoba & on to Madrid by rail

A panoramic tour of the charming Moorish-influenced city of Córdoba with your local guide leads to a walking tour through the historic former Jewish Quarter and a visit to the ornate 8th-century La Mezquita, once one of the world’s largest mosques, and now a Roman Catholic cathedral. Board the high-speed AVE train and have lunch as you travel in Preferente class to Madrid, where your Spain holiday continues for the next two nights in the country’s marvellous capital city.
Meals Included: Breakfast & Lunch
Accommodation: The Westin Palace, Madrid

The Prado & more in Madrid

Your day in magnificent Madrid kicks off with a guided tour of the famed Museo Nacional del Prado, one of the finest art museums in the world. Later, a city sightseeing tour takes you to highlights including Palacio de Oriente, the ornate Royal Palace built in the 18th century; grand avenues such as Gran Via and Castellana, and El Parque del Buen Retiro. The afternoon is free to explore as you please and have lunch on your own. Enjoy typical Castilian entertainment at our farewell cocktail reception and dinner this evening, a fitting finale to your one-week Spain holiday.
Meals Included: Breakfast & Dinner
Accommodation: The Westin Palace, Madrid

We wish you a safe and pleasant journey homeward as you bid adios to Spain. Your Spain holiday with Tauck ends in Madrid. Fly home anytime. A transfer is included from The Westin Palace, Madrid to Madrid’s Barajas Airport or the Madrid Atocha railway station; allow 3 hours for flight check-in.
Meals Included: Breakfast

*Rates are person based on twin share. Single supplements apply, please speak to one of our Travel Specialists for more information.