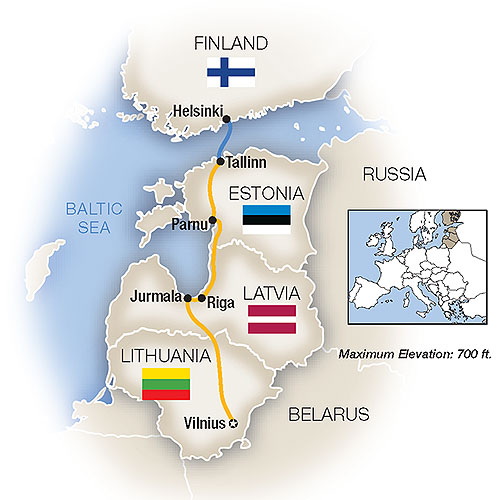 With its remarkable Baroque and Renaissance architecture, including the 16th-century cathedral and adjacent Cathedral Square, Old Town Vilnius is sort of a living museum – as you’ll appreciate on a walking tour of this UNESCO World Heritage Site. If you wish, join us for a visit to the KGB Museum; set in the building that was headquarters of the German Gestapo during WWII, then of the Soviet Secret Police (KGB) from 1944-1991, it chronicles the repression of and resistance to the Soviet occupation of Lithuania. Later, set off along the Yellow Roads to the medieval town of Trakai; visit its historic castle dating to the 14th century. Back in Vilnius, spend the evening as you please in Lithuania’s capital.
Meals Included: Breakfast & Lunch
Accommodation: Kempinski Hotel Cathedral Square

Along the Yellow Roads to Latvia

From Vilnius, travel along the Yellow Roads through idyllic Lithuanian countryside and into Latvia. Stop in seaside Jurmala en route to Riga. Latvia’s capital was among the leading trading centers of Central and Eastern Europe in its heyday from the 13th to the 15th centuries; you’ll visit the city’s opulent 19th-century Opera House, lovingly restored during the 1990s and now a source of great national pride for the people of Latvia, and do some exploring on your own. Spend the next two nights at the Grand Hotel Kempinski Riga in the heart of the old city, where you’ll enjoy an included dinner tonight or tomorrow.
Meals Included: Breakfast, Lunch & Dinner
Accommodation: Grand Hotel Kempinski Riga

Drive to Riga’s New Town for a guided walking tour of what’s considered the best collection of Art Nouveau buildings in Europe. Then it’s on to Riga Market and the cobbled streets of Old Town, lined with historic structures dating back 800 years; you’ll see Riga Castle, the Swedish Gate and the Three Brothers Medieval Dwelling House, all part of a UNESCO World Heritage Site. Those who wish may join us to explore some of Riga’s somber reminders of the tragic years of the Holocaust in Latvia, on visits to the Jewish Museum and the city’s old Jewish Cemetery (holidays permitting).
Meals Included: Breakfast
Accommodation: Grand Hotel Kempinski Riga

On to Tallinn, capital of Estonia

Our Baltic States tours take you from Latvia into Estonia this morning via the Riga – Tallin Road, with a stop in the seaside resort town of Parnu for lunch. Today’s final destination is Estonia’s capital city, Tallinn, a fine example of a Northern European trading center of the Middle Ages. A walking tour with your local guide explores Tallinn’s cobblestoned Lower Town, a UNESCO World Heritage Site, with its Town Hall square, walls and towers (including one affectionately dubbed “Fat Margaret”) and St. Olaf’s Church, which reigned as the known world’s tallest building between 1549 and 1625. Your contemporary hotel is ideally located close to Old Town; enjoy dinner this evening at a noted local restaurant.
Meals Included: Breakfast, Lunch & Dinner
Accommodation: Swissotel Tallinn

Toompea Castle & a ferry to Helsinki

In use since around the 9th century AD, mighty Toompea Castle in Tallinn’s well-preserved city center, a UNESCO World Heritage Site, still looks pretty much as it did after 12th-century renovations, and is home to the Estonian Parliament today. After visiting this ancient hilltop stronghold, you’ll board a high-speed ferry and cruise first class across the Gulf of Finland to Helsinki, Finland, for a two-night stay at the Hotel Kamp. An intriguing mix of parks, waterways, and numerous architectural styles, the Finnish capital is yours to explore on a sightseeing tour – including the Neo-Classical Senate Square; Helsinki Cathedral, with its iconic green cupolas and white columns; Finlandia Hall; and the Sibelius Monument, honoring Finland’s greatest composer.
Meals Included: Breakfast & Lunch
Accommodation: Hotel Kämp

Discovering Helsinki & the music of Sibelius

A day of exploration in Helsinki winds up your journey today. Start with a guided visit to the National Museum of Finland in central Helsinki. In this National Romantic-style building, which originally opened in 1916 and was renovated and re-opened in 2000, a vast collection including archaeological finds, coins, jewelry, silver, weapons and other artefacts interpret Finnish history and culture from prehistoric times to the present day. Then visit Temppeliaukio (The Rock) Church, hewn from solid rock in the 1960s. Later, a private concert features the works of beloved Finnish composer Jean Sibelius (1865-1957), whose music helped foster his country’s national identity during the 19th and 20th centuries. Spend the afternoon as you wish, and join us tonight for a farewell reception and dinner at the hotel.
Meals Included: Breakfast & Dinner
Accommodation: Hotel Kämp

Tour ends in Helsinki, Finland. A transfer is included from the Hotel Kamp to Helsinki Airport.
Meals Included: Breakfast

Additional dates and rates may be available, please speak to one of our Travel Specialists for more information.

*Rates are subject to availability and seasonality and may change without notice. Rates are based on two adults sharing. For solo travellers or single person occupancy rates or further information on terms and conditions, please contact our Travel Specialists at time of booking.

The luxurious and elegant Kempinski Hotel Cathedral Square is truly a distinctive and individual hotel, offering a one-of-a-kind experience in the very heart of Vilnius. Relax, enjoy and find yourself surrounded by refinement  overlooking the Cathedral Square and Old Town. Boasting elegant design and décor, wooden floors, subtle lighting, the finest fabrics and exclusive furnishings, each guest room offers unforgettable accommodation and lavish amenities paired with the ultimate Kempinski service – featuring in-room coffee/tea facilities, flat-screen TV, a lounge area, a laptop-size safe and a working desk. Dine in style at Restaurant Telegrafas, highlighting seasonality and the freshest ingredients, blending the best European culinary traditions and local heritage, and presenting them with a modern twist. Relax and enrich yourself with remarkable moments at our Le Salon Bar and Lounge; all about champagne, the finest selection of cocktails and a laid-back atmosphere, it is an ideal place to unwind in Lithuania’s historic capital city.

Originally built in the 19th century, the newly restored Grand Hotel Kempinski Riga is situated in the heart of the Latvian capital, just opposite the Latvian National Opera House and near the entrance to the city’s historic medieval center, with most main attractions within walking distance. Discover the finest collection of luxury guest rooms, featuring modern, stylish interiors and equipped with king or twin beds with choice of pillows, walk-in closet, working desk, safe, flat-screen TV, in-room coffee/tea facilities and climate control. Grand Hotel Kempinski Riga’s dining and drinking options include the signature Amber Restaurant; the stylish rooftop restaurant & bar Stage 22; the Berthold Deli; and the Grand Bar, the Lobby Lounge and the Cigar Lounge. The hotel also features Kempinski The Spa, featuring six treatment rooms, a swimming pool and a health club with fitness center.

Surveying the city from the tallest building in town, the modern Swissôtel Tallinn enjoys a prime location in what is known as the “Wall Street of Tallinn.” Guest rooms at the newest luxury hotel in Tallinn feature all the amenities that today’s sophisticated travellers expect, including high-speed Internet wireless access, voice mail and an espresso machine. The “Amrita Spa & Wellness” offers an indoor swimming pool and gymnasium as well as rejuvenating spa treatments. Assuage your palate with modern eclectic cuisine and a range of fine wines at the hotel’s Horisont Restaurant – Tallinn’s most exciting dining venue offering unrivalled views – and cap the evening with cocktails and pulsating music at the Horisont Bar. Or indulge in authentic Swiss delights, international and local specialties at Café Swiss; innovative cakes and sandwiches at No. 3 Deli-Lounge-Bar; or the most prestigious brands of cigars in the exclusive atmosphere of the Cigar Lounge.

Hotel Kämp enjoys a wonderful location in the center of Helsinki just across from the Esplanade Park and a short walk from the scenic Harbor. Guest rooms have been completely refurbished while carefully preserving the hotel’s late-19th-century heritage. Amenities include down duvets and pillows (synthetic available upon request), a Sweet Dreams Menu with a choice of complimentary accessories for a great night’s sleep, bathrobes, slippers and a hairdryer, 37-inch flat-screen TV with video-on-demand, iron and ironing board, minibar and in-room safe. Rev up or wind down at the Kämp Spa & Gym featuring everything from Cybex exercise equipment to three different sauna experiences. The menu at the Japanese restaurant Yume follows the rhythm of the changing seasons. Restaurant Kämp Signé specializes in seasonal Finnish specialties while the Brasserie Kämp & Bar is the place for both the classics and the latest trends in food and drink.