From the grand museums and monuments of Paris where you’ll discover the cultural secrets of the ‘City of Light’, travel south to the Rhône where the delights of Lyon await and follow the river into sunny Provence and the glittering Côte d’Azur.

This is an Abercrombie & Kent private journey and can be tailor-made to fit with your travel dates and built around your desires. Depending on your preferred dates and arrangements, final pricing will vary from low season to peak season travel. 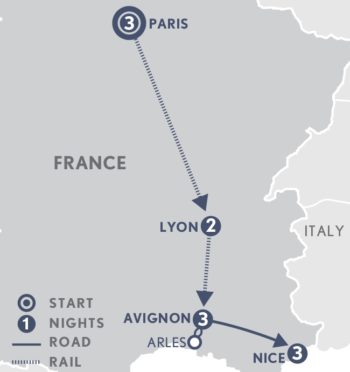 Arrive into the French capital and transfer to your hotel located on the fashionable Left Bank.
Accommodation: Hotel Lutetia (Grand Superior Room)

Discover the bohemian side of Paris today starting with a visit to the Musée d’Orsay. Housed in a stunning 19th century converted railway station, the Musée d’Orsay is one of Paris’ most famed museums and represents all expressive forms of artistry from painting to architecture, and sculpture to photography. Boasting an extraordinary collection of impressionist works, permanent exhibitions include works by world-renowned artists such as Renoir, Sisley, Pissarro and Monet. Combined with a stunning post-impressionist collection, which comprises works by Van Gogh and Cézanne amongst others, the museum serves as a fascinating insight to the history of art culture of the western world since 1848. Continue with a walking tour of the Latin Quarter exploring the narrow alleyways and winding streets with your guide as you learn about the evolution of Parisian architecture, from the chaotic streets of the Left Bank to the uniform grandeur of those on the Right. Amble through the stunning Luxembourg Gardens and on to the Centre Pompidou. This quirky building houses the National Museum of Modern Art. Ride the exterior escalator to the top for panoramic views of the Marais and drinks as the sun sets.
Meals Included: Breakfast
Accommodation: Hotel Lutetia (Grand Superior Room)

Considered by many to be the world’s greatest museum, you discover the Louvre this morning on a specially curated visit. With a mesmerising collection spanning works from ancient antiquity to the mid-19th century, you’ll be introduced to some of the most famous such as the exquisite ‘Venus de Milo’ and Da Vinci’s incomparable ‘Mona Lisa’. Time to explore on your own this afternoon before a nostalgic evening tour of the city in a classic Citroen 2 CV.
Meals Included: Breakfast
Accommodation: Hotel Lutetia (Grand Superior Room)

Discover France’s second city today on a guided tour through the cobbled streets of ‘Vieux Lyon’ admiring its 17th and 18th century mansions, small museums and the City’s cathedral. Above Vieux Lyon are the remains of Roman theatres and the Basilique de Notre-Dame, visible from all over the city. Visit the Museum of Fine Arts with its impressive collection that spans centuries and styles. Finish up in Les Halles de Lyon, the famous covered market, where you’ll be able to savour local delicacies stall by stall.
Meals Included: Breakfast
Accommodation: Villa Florentine (Classic Room)

Journey south by high speed train to Avignon and transfer to your charming hotel which is situated in a peaceful cobbled square at the foot of the Palais des Papes.
Meals Included: Breakfast
Accommodation: La Mirande (Grand Deluxe Room)

Dominated by the Papal Palace, Avignon is a vibrant Provençal town with plenty of character, and today you’ll discover it on a walking tour that starts at the Place de l’Horloge (Clock Square) and enters the great palace where seven popes reigned supreme during their ‘schism’ with Rome between 1309 and 1377 and whose grand proportions convey the power and glory of the period.
Meals Included: Breakfast
Accommodation: La Mirande (Grand Deluxe Room)

Originally founded in the seventh century BC by the Phoenicians, Arles has a strong Gallo-Roman heritage. A major port on the Rhône River until the arrival of the railway in the 19th century, it boasts a wealth of classical antiquities which are highlighted at the state-of-the-art Museum of Ancient Arles. Afterwards, wander through the city’s shady squares and sun-baked streets appreciating the magical light which so inspired Van Gogh.
Meals Included: Breakfast
Accommodation: La Mirande (Grand Deluxe Room)

This morning you are driven east to Aix-en-Provence where you visit the Musée-Atelier de Paul Cézanne where the legendary post-Impressionist artist painted some of his most well-known works. Continue to Nice, in the heart of the French Riviera, and your boutique hotel in the Old Town.
Meals Included: Breakfast
Accommodation: Hotel La Perouse (Deluxe Room with Full Seaview)

Get your bearings this morning at the top of Colline du Château (Castle Hill) and enjoy show-stopping views of the city and bay before returning to the historic Old Town. Next stop the lively Cours Saleya, where colourful stalls of fresh flowers, fruit and vegetables are a photographer’s dream. Later visit the Musée Matisse, which features a collection of works donated to the city by the artist and his heirs, and the Musée Marc Chagall housing the artist’s biblical works among many others.
Meals Included: Breakfast
Accommodation: Hotel La Perouse (Deluxe Room with Full Seaview)

Today spend a day in the medieval village of Saint-Paul de Vence, still a magnet for contemporary artists. Visit the Fondation Maeght, a privately-owned modern art museum set on a wooded cliff top, containing one of the most important collections in Europe, with paintings, sculptures, drawings and other works by Braque, Calder, Chagall, Giacometti, Lèger and Mirò. Later today, visit the Rosary chapel, considered to be the masterpiece of Henri Matisse.
Meals Included: Breakfast
Accommodation: Hotel La Perouse (Deluxe Room with Full Seaview)

Twin Share Per Person: From $16,000
Solo Traveller: On request

This is an Abercrombie & Kent private journey and can be tailor-made to fit with your travel dates and built around your desires. Depending on your preferred dates and arrangements, final pricing will vary from low season to peak season travel.

Set in an old mansion at the foot of the Palais des Papes in the heart of Avignon, the 5* La Mirande is steeped in history. This timeless refuge offers a dreamy, relaxing and authentic experience in a refines, 18th century décor. With both a gastronomic restaurant and a chef ‘s table, the hotel serves delicious cuisine that reflects its heritage and surroundings.

The hotel is named after the famous room in the Palais des Papes, La Mirande, where the Pope’s representatives held receptions for the city’s notables and visiting high-ranking officials.

Modern comforts are seamlessly integrated with old ensuring the bright and cheerful rooms have unique décor. This property feel more like a private home than a hotel with attentive personalised service and cosy corners to relax in.

The afternoon tea is to die for. Madeleines, gingerbread, almond croquants, poppyseed cakes, chocolate fondants and seasonal fruit tarts are baked and served with hot chocolate prepared in the traditional way or with exceptional teas selected by La Mirande, some of which are organically grown.

The garden is a welcome retreat from the hustle and bustle of the city, in the evening it really comes to life with clever lighting and is the perfect spot for a digestif.

Hotel Lutetia is an iconic landmark in Paris’ vibrant Saint-Germain-des-Prés and the only luxury grand hotel on the Left Bank. Originally opened in 1910, the building’s design was a daring move from Art Nouveau to the emerging style of Art Deco. It has recently reopened after a multi-million dollar refurbishment delivering an authentic Parisian experience in 184 guest rooms and an eclectic mix of bars and restaurants, including the Michelin-starred Brasserie Lutetia, and the Akasha Holistic Wellbeing Centre.

Designed by a leading Provençal architect and a member of Leading Small Hotels of the World, this opulent but intimate hotel is the perfect base from which to explore the fantastic restaurants, boutiques and cafés of this region.

The whole place is designed with style and comfort in mind, from the well-chosen, understated furnishings and décor to the cool, marble bathrooms. A delightful sun terrace enjoys superb views across Nice and the Mediterranean from its elevated position.

La Perouse is the very definition of a boutique, luxury hotel. From the rooms to the fragrant gardens, it is a perfect hideaway in the centre of Nice.

On a Lyon hillside overlooking Saint Jean Baptiste Cathedral within a 17th century villa, stands Villa Florentine, a picture of historic French elegance. In the heart of the UNESCO World Heritage site of Vieux Lyon, the 28 stylishly decorated rooms, suites and apartments boast French ceilings, mezzanines, Italian mosaic, intimate terraces and balconies, with breathtaking city views. Enjoy breakfast delivered to your room, as you watch the sunrise slowly washing over the cityscape.

Savour an unforgettable meal at the Michelin starred “Les Terrasses de Lyon, enjoying a subtle gastronomic alchemy by chef David Delsart as he combines beautiful local produce with high-end culinary techniques. Relish a delectable dining experience paired with a remarkable view, as you look out over the rooftops of Old Lyon.

Take some time to unwind with a visit to the hotel spa, indulging in a massage, beauty treatment, or a dip in the heated pool. The hotel also has a fitness centre available.