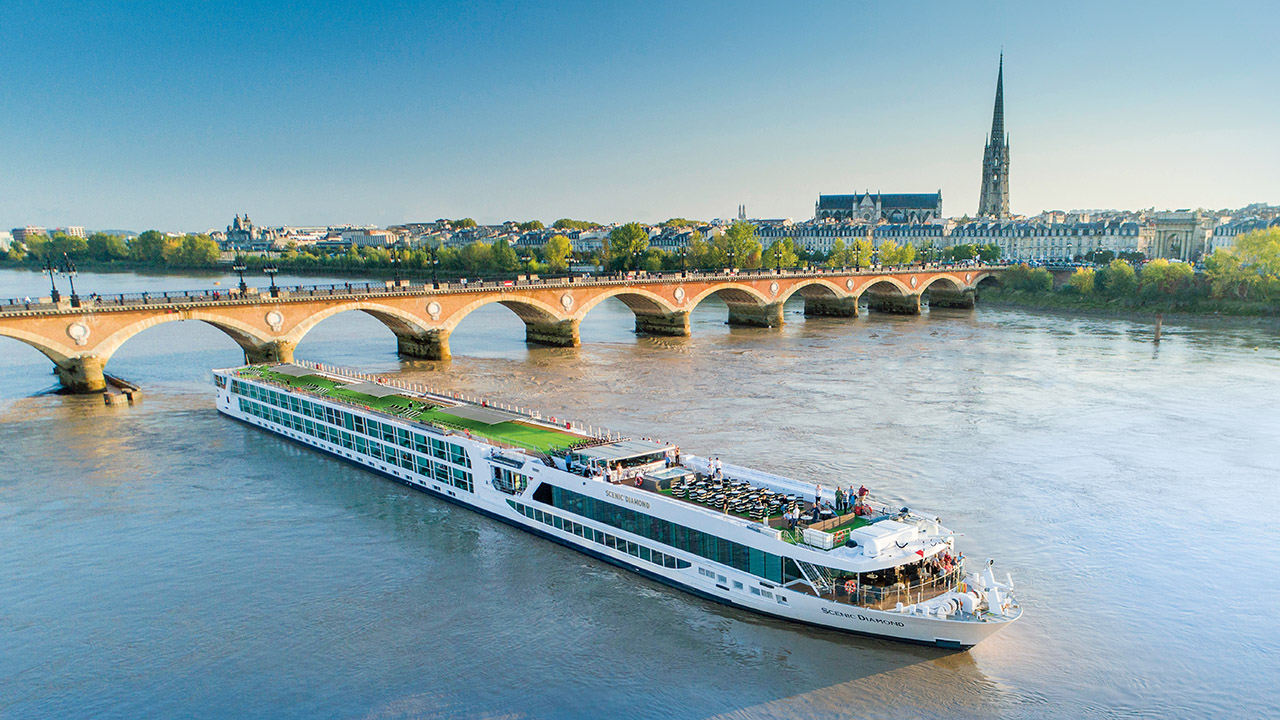 It’s not too late to cruise in 2022/2023, but don’t delay as our offers are limited and cabins are filling fast.

Enjoy 5-star all-inclusive luxury as you cruise the spectacular waterways of France on board your Scenic Space-Ship. With exclusive events and activities, complimentary beverages, return airport transfers and more, there is nothing left to pay – we won’t even ask for your credit card at check-in.

From humble beginnings to world-renowned Luxury Cruise and Tour operator, in 2016 Scenic celebrated 30 years as a leader in its field. The Scenic team has worked tirelessly to earn a world-class reputation for creating and delivering the ultimate cruising and touring itineraries for travellers who seek wondrous experiences and exceptional 5-star service.

Founded in Newcastle by Glen Moroney, the company started in 1986 with coach tours operating throughout Australia. In the early 1990s this expanded to New Zealand, followed by Norfolk Island in 1997 and Southern Africa in 1998. By the end of the decade Scenic started hosting tours to Canada and Alaska and thanks to their on-going commitment to ingenuity and a passion for travel we were soon the leading touring company in Canada and Alaska.

Throughout the early 2000s new destinations across Europe and Russia, throughout Asia and South and Central America were soon part of their tour itineraries.

A new and historic chapter commenced in 2008 as Scenic took on the exciting world of ship-building.

Over the next seven years they continued to grow their Scenic Space-Ship fleet as well as upgrading their existing ships to bring the ultimate in luxury to all their river cruising guests. By 2016 they had a grand total of 20 ships sailing across Europe rivers including, the Main, Rhine and Danube as well as on the Volga River in Russia. They’ve come to be known as the France River Cruise Specialist with ships on the Seine, Bordeaux, Saône and Rhône rivers and in 2016 began sailing through beautiful Portugal on the Duoro.

Their first foray in South East Asia River Cruising happened in 2016. Scenic Spirit launched in January 2016 and provides an unsurpassed level on luxury on the Mekong River. Scenic’s newest river cruise ship, Scenic Aura, launched on Myanmar’s Irrawaddy River in September 2016, offering the ultimate in pampering whilst on board.

In 2015, as they prepared for a new chapter that would take them into a whole new travel realm, Scenic Tours went through a significant rebrand. The new Scenic brand focuses on the sense of wonder they give their guests.

And wonder is certainly what Scenic hope they felt with the launch in January 2016 of their most exciting and ambitious chapter yet: Scenic Eclipse – The World’s First Discovery Yachts. Setting a new standard for ocean cruising, Scenic Eclipse are equipped with two on board helicopters and a seven-seat submarine, taking guests to places previously thought inaccessible. With an on board Discovery Team, a range of shore excursions and unparalleled luxury and service, the World’s First Discovery Yachts truly eclipse all expectations.

In 2017, Scenic becomes the first and only river cruise operator to feature Salt Therapy Lounges on Scenic Diamond and Scenic Sapphire in France. In 2019, due to popular demand, these were added to the Space-Ships on the Rhine, Main and Danube rivers.

A proudly Australian founded company Scenic has offices across the globe, two sister companies, Evergreen Tours and Emerald Waterways and after more than three decades of successful operation, is looking towards an exciting future.

Scenic is a member of CLIA (Cruise Lines International Association), IATA (International Air Transport Association), CATO (Council of Australian Tour Operators), and is ATAP Accredited (Australian Tourism Accreditation Program) which validates its strength, capabilities and international presence. Scenic is also an Inbound Tour Member of the Tourism Export Council of New Zealand. Scenic has been the recipient of national and international accolades from the industry and its partners, as well as recognised within the industry for its exemplary product and operations.

In 2016 Glen Moroney was welcomed into the (CLIA) Hall of Fame for his pioneering work in the rapidly growing river cruise sector.

After more than three decades in the business, Scenic is still as passionate about travel and committed to guest satisfaction as it was in 1986. Scenic goes to the Nth degree to ensure its guests have the holiday of a lifetime.