The jet-set life and a lifestyle that dates back a thousand years are combined on an itinerary that leads from the glittering Côte d’Azur to the port for the Eternal City, Rome. Your voyage begins in Nice, the “Queen of the Côte d’Azur” and the second-largest city in France. Then, call on Monte Carlo, home of the famous Grand Casino, before sailing on to  Villefranche, a pretty resort town. Portofino, a pastel fishing village on the Italian Riviera, is next, followed by Porto Venere, named a UNESCO World Heritage Site for its fabulous scenery and ancient traditions. Then, cruise to Florence, the “Cradle of the Renaissance," and to the island of Elba, where Napoleon was first exiled, before continuing on to the Italian capital, where your journey ends. Don’t miss this dazzling overview of one of the most coveted regions in the world!

The jet-set life and a lifestyle that dates back a thousand years are combined on an itinerary that leads from the glittering Côte d’Azur to the port for the Eternal City, Rome. Your voyage begins in Nice, the “Queen of the Côte d’Azur” and the second-largest city in France. Then, call on Monte Carlo, home of the famous Grand Casino, before sailing on to  Villefranche, a pretty resort town. Portofino, a pastel fishing village on the Italian Riviera, is next, followed by Porto Venere, named a UNESCO World Heritage Site for its fabulous scenery and ancient traditions. Then, cruise to Florence, the “Cradle of the Renaissance," and to the island of Elba, where Napoleon was first exiled, before continuing on to the Italian capital, where your journey ends. Don’t miss this dazzling overview of one of the most coveted regions in the world!

The “Queen of the Côte d’Azur” and the second-largest city in France, Nice offers beautiful views of hilltop villages, Art Deco façades, and a stunning coastline along the blue-green Mediterranean Sea. You’ll embark The Moana here and enjoy time to settle into your stateroom before the ship sets sail this evening.

Ruled by the Grimaldi family since 1297, with only brief interruptions, the Principality of Monaco is the world’s second-smallest country (after the Vatican). Sandwiched between mountains and the sea, Monte Carlo is a district of the country and home of the famous Grand Casino. Monte Carlo’s steep and winding streets have been featured in numerous films, including Alfred Hitchcock’s “To Catch a Thief” starring Grace Kelly, who would become Princess Grace of Monaco upon her marriage to Rainier III in 1956. Besides the casino, attractions of this glamorous district include numerous museums, churches, monuments, and gardens.The Moana stays here overnight, allowing you to experience Monte Carlo at its liveliest: after dark.

This morning, the captain charts a course to Villefranche, a charming resort town on France’s Côte d’Azur. On your port call here, perhaps you’ll stroll the narrow cobbled streets of the romantic Old Town … view the 16th century citadel … visit the 14th-century Chapelle Saint-Pierre (Saint Peter’s Chapel) and Église Saint-Michel (Saint Michael’s Church) … or follow the ancient Rue Obscura, a covered walkway near the waterfront. Or simply relax on sandy beaches or at the city’s terrace cafés.

Located on a peninsula in the Italian Riviera, this pretty, pastel resort and fishing village in the northern Italian region of Liguria is dominated by a 16th-century castle overlooking crystalline green waters filled with marine life.

Overlooking the Gulf of Poets in the northwestern Italian province of Liguria, Porto Venere was designated a UNESCO World Heritage Site, together with the nearby Cinque Terre villages, for its combination of scenic beauty and a traditional way of life that dates back 1,000 years. Admire the pastel-colored homes that line the picturesque waterfront, and narrow stairways and cobbled lanes lined with shops that radiate out from the waterfront. Visit the 12th-century Chiesa di San Lorenzo church and the 16th-century Castello Dorio, a fortified Genoese castle with manicured gardens and stunning views. Venture to Byron’s Grotto, where Lord Byron swam across the gulf to Lerici to visit his friend and fellow poet, Percy Bysshe Shelley, in 1822. Or follow one of several hiking trails that lead out from the town.

The Moana’s mooring in Livorno provides easy access to Florence, the “Cradle of the Renaissance”, where magnificent artwork abounds in museums, palaces, cathedrals, and gardens. Also the capital of Tuscany, Florence is dominated by the massive Duomo, the world’s fourth-largest cathedral, whose giant dome was the largest in the world during the 15th century, when it was constructed. While here, admire masterpieces by such legendary artists as Michelangelo, Da Vinci, Donatello, Brunelleschi, Botticelli, Caravaggio, Rubens, Giotto, and so many others.

“The Pearl of the Tuscan Archipelago” is a beautiful island in the Tyrrhenian Sea that once was connected by a land bridge to Corsica, birthplace of Napoleon Bonaparte. It is better known today as the site of Napoleon’s exile after his abdication in 1814. The chief city on the island, Portoferraio, dates to the Etruscan civilization and offers many historic landmarks, as well as beautiful beaches.

The heart of the ancient Roman empire and capital of modern Italy, Rome is one of the world’s great cultural centers, and an abundance of monuments, cathedrals, artistic masterpieces, and more reflect the city’s rich ancient, medieval, and Renaissance history. You’ll disembark The Moana after breakfast this morning in the port city for Rome, Civitavecchia . 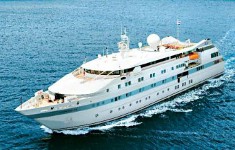 MV Tere Moana is a sophisticated and intimate vessel accommodating 90 guests, this newly renovated vessel features spacious staterooms, two restaurants – L’Etoile and La Veranda and a spa among other attributes. Onboard you can enjoy the ultimate in personal service, with one crew member for every 1.5 guests.

Onboard there are 45 spacious and well designed cabins with passenger accommodation arranged over three of the five decks. Private balconies have been added to eight of the ship’s 45 staterooms, all of which have ocean views. Balcony Staterooms measure 298 square feet including the balcony. Window Staterooms in categories B and C are 194 square feet and feature a picture window. All staterooms feature an ocean view, temperature control, king-size bed (all have twin bed configuration), bathroom with full size shower and bath products, bathrobes and slippers, desk/vanity area with stool and 110V and 220V outlets, closet with draws, TV, CD/DVD player, complimentary in room movie channels, Bose sound docking station, direct dial satellite telephone, personal safe and refrigerator.

The spacious and finely decorated public rooms are spread across all decks. On deck 6, the sun deck offers a chance to relax and unwind in the whirlpool, or just soak up the sun on a Balinese bed or a chaise lounge. The pool on deck 5 invites you to take a dip or perhaps relax in a comfortable deck chair with a good book. Early risers can enjoy a light breakfast at the Pool Bar. The fitness centre is also on deck 5 and is fully equipped with a wide range of equipment as is the Deep Nature Spa where an expert therapist offers an extensive menu of massage, skin care and facial treatments. On deck 4 there is a book and DVD library which is open 24 hours a day and La Veranda is where breakfast and lunch can be enjoyed in the sophisticated relaxed setting of the restaurant or al fresco (limited number of al fresco tables). On deck 3 you will find La Boutique which offers a selection of clothing items and duty free gifts from around the world. A limited selection of sundry items and other travel necessities is also available for purchase. There is also Le Salon, a comfortable area with inviting seating areas accented by illuminated Tahitian custom artwork and sparkling, crystal table lamps. After a day of exploration, it is the perfect place to enjoy cocktails, conviviality and live piano music. L’Etoile is the principal restaurant on board on deck 2 featuring contemporary cuisine.

Your Dining
Throughout your voyage, enjoy sumptuous meals prepared from fresh ingredients and inspired by the local cuisine of your destination. Complimentary wine is perfectly paired with dinner. You will enjoy the culinary delights of Jean-Pierre Vigato, Chef Proprietaire of the world renowned two Michelin starred Restaurant Apicius in Paris. His signature menu is featured at L’Etoile. The elegant main dining room, L’Etoile is open for dinner daily and has an open seating policy. Featuring perfectly appointed decor, crisp linens and an array of tempting specialties, expertly prepared. The principal restaurant on board, it features contemporary cuisine, various vegetarian dishes, local specialties representing the cruise destination, and any special dietary requests guests may have (with advance notice). Dinner is served a la carte, with various entree selections that change daily, including one featured menu item per day inspired by Chef Vigato. For lunch, dine a la carte, or enjoy the buffet, often featuring an international theme. Breakfast is also served buffet style. A limited menu for 24 hour room service is also available.

For your comfort, safety and security
The Medical Centre is designed to provide medical care for temporary illnesses and accidents. The ship’s licensed and registered doctor is on 24 hour call for professional and emergency services, which are available at customary charges. The vessel fully complies with all national and international regulations with respect to safety at sea and is in compliance with SOLAS (convention of Safety Life at Sea). The MV Tere Moana has a state of the art stabilizer system that keeps rocking to a minimum.

Life Onboard
If large resort style vessels accommodating many thousands of passengers are your ideal, then the MV Tere Moana is not for you as you will not find endless entertainment, round the clock buffets and the people management which is so much a part of today’s big ship onboard style. However, if you like us you prefer a more peaceful life at sea you will find this the ideal vessel. The atmosphere onboard is informal; a little live piano music in the lounge or bar after dinner, talks from our guest speaker and informative port briefings and of course good food, all contribute to make any voyage aboard this wonderful vessel a memorable and joyful experience. After a day ashore you will return to the comfort and peace of an exceedingly comfortable ship. The dress code is smart casual, jacket and tie are optional.

Launched in 1998, the renowned, 5+-star m/s Paul Gauguin was built specifically to sail the waters of Tahiti, French Polynesia, and the South Pacific and is the longest continually operating year-round luxury cruise ship in this enchanting destination. No other luxury ship in history has offered this level of single-destination focus and expertise on a year-round basis for such an extended period of time.